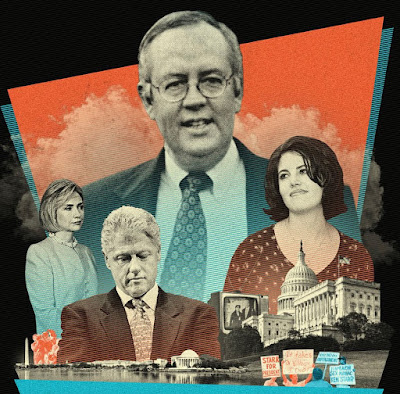 The Saturday-Sunday, September 1-2, 2018, edition of The Wall Street Journal carried an excerpt from Kenneth Starr's new book, which Starr has titled Contempt: A Memoir of the Clinton Investigation. The Journal called its piece, "The Impeached President."

I have recently written in this blog about impeachment, and initially minimized the significance of the "high crimes and misdemeanors" with which President Bill Clinton was charged.

Almost immediately after writing a blog post to that effect, I had second thoughts, based on a column in The New York Times. I then restated my position, as follows:

I really believe I stand corrected. I don't want to be associated with any claim that when the President of the United States lies (particularly under oath), that such lying is in any way "ok." We can't allow any of our elected officials to operate under a "truth-optional" standard.

Naturally, I was interested to see the article in The Wall Street Journal, which is essentially a justification by Starr of his pursuit of President Clinton on the basis of the president's lies about his sexual contacts with Monica Lewinsky. For any who lived through that part of our history, I imagine that the Starr justification will be worth reading.

What I thought most noteworthy in the excerpt published in The Journal was the way it concluded. Starr says that he did not like the independent counsel law under which Starr's investigation operated; he thinks the "special counsel" regulations under which Robert Mueller is operating are better. Nonetheless, Starr says:

Even with the reformed structure for appointing and overseeing special prosecutors, the cries are once again heard throughout the land: “Witch hunt!” The struggle for assuring integrity and honesty in government is being played out all over again.

The way I read this, Starr is legitimating the investigation of our current president, Donald J. Trump, and is saying that when the president violates standards of integrity and honesty it is perfectly appropriate to impeach the president on that basis.