Santa Cruz Indivisible sponsored a wonderful event last night, a "Conversation about Voting Rights and Elections." This conversation was held at the Rio Theatre in Santa Cruz. John Laird, former Santa Cruz City Council Member and Mayor, a former State Assembly Member, and now the Secretary for Resources of the State of California, moderated a panel that included Alex Padilla, the California Secretary of State, and Gail Pellerin, the Santa Cruz County Registrar of Voters.

Voting security was discussed, and there is good news. We are safe in Santa Cruz County and in the State of California. In our state, every ballot is a paper ballot or is documented with a paper record, to make it possible to defeat any voting machine tampering, and no voting machine is connected to the Internet.

Perhaps most exciting was Alex Padilla's description of the California Voter's Choice Act, legislation that was sponsored by Padilla that truly opens up our election system to facilitate maximum participation. It's being phased in on a step by step basis. It's coming our way soon!

As explained by Padilla, when you get a Voter's Choice ballot, it won't be a "sample" ballot; it will be your real ballot. That ballot comes thirty days before the election, and once you have your ballot, you can return it in several different ways, whichever is most convenient to you: (1) You can mail your ballot back (no postage needed in Santa Cruz County); (2) You can vote in person on election day; or (3) You can drop off your ballot in secure locations, throughout the county, and you can do that starting eleven days before the election, and right up through election day.

Moreover, Voting Centers will allow any voter (or anyone eligible to be a voter) to vote in person at a location that is convenient to the voter, and you can register to vote at one of those Voting Centers right up to and including election day.

I am thinking that the California Voter's Choice Act is now the "gold standard" for elections and that efforts should be made, immediately, to get all elections in the United States to meet this standard. As a practical matter, the Voter's Choice Act eliminates virtually all bureaucratic impediments to voting, and thus puts the most important tool of democratic self-government within the reach of everyone who is entitled to vote. If citizens are energized, no legalistic requirements will prevent them from using their voting power.

Here's a picture from February 2017, showing one of the inaugural meetings of Santa Cruz Indivisible, at the Santa Cruz Civic Auditorium: 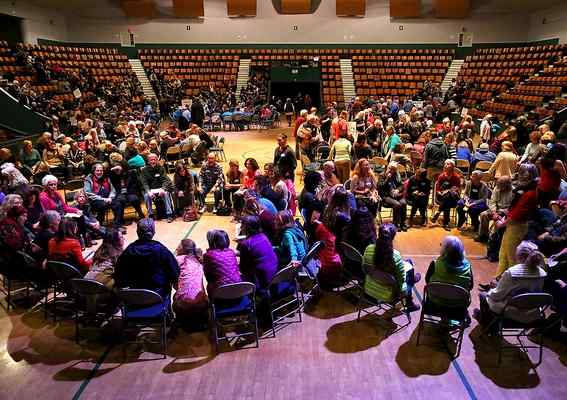 Santa Cruz Indivisible will be back in the Civic Auditorium on September 8th, one week from today. If you think it might be worthwhile to spend some time revitalizing our democracy, you are most cordially invited to attend this meeting! Just click this link to sign up with Santa Cruz Indivisible, and for more information on the September 8th event.