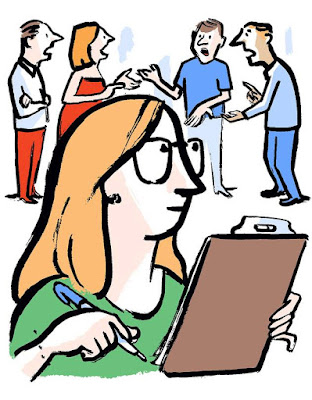 In its August 3-4, 2018 edition, The Wall Street Journal ran an article by James Fishkin, a professor at Stanford University. As I read his article, "Yes, Ordinary Citizens Can Decide Complex Issues," it all sounded rather familiar. Then, I realized why. It sounded familiar because I had heard Fishkin in person at the 2017 Conference sponsored by The Hannah Arendt Center, "Crises of Democracy: Thinking in Dark Times." If you want to, you can hear Fishkin in person, too - in a video recording that is online. Just click that link to the Arendt Center Conference, which will take you to a place where you can track it down.

To read the  more recent article, you might have to be a subscriber to The Wall Street Journal, so let me summarize it for you. Fishkin believes that the participation of ordinary people in making complex policy decisions is quite possible (as well as being desirable), and he has a particular formula for how to do it. Fishkin's methodology has been used worldwide, and "yes," the technique seems to work:

We aim to give citizens a chance to think through difficult issues under conditions that encourage informed deliberation. To achieve this, we use pollsters to gather a random sample of people, a microcosm of society, but we don’t just ask them to react to sound bites and headlines, as is done in conventional polling.

We start instead with an agenda put together by an advisory committee representing different points of view on an issue. They create briefing materials that strive for a balanced, accessible account of the debate. The people in our sample review these materials, question the competing experts and then deliberate about the best course of action. They offer their views in confidential questionnaires. Once they’ve decided, we compare these considered judgments to the views they had before going through this process.

But this isn’t just some academic exercise or thought experiment. Over the past three decades, I have worked with various collaborators to conduct deliberative polls more than 100 times in 28 countries, and in many cases, the results have had real-world consequences.

I like what Fishkin has to say, but the presentation he advances comes across, at least possibly, as good advice for those actually running the government, giving them a "new tool" that they can use to govern the public.

My thought is that a truly democratic government needs to be "of" and "by" the people, not just "for" them. Thus, these "deliberative democracy" techniques need to come from the bottom up, not from the top down.

To me, the most important thing in making democracy work is always the realization, by ordinary men and women, that they have the power to decide what should be done, with that realization then leading to their effective insistence that they will be the people who actually make the key decisions. Being consulted by those who actually have the power, and who will actually be making the decisions, is second best.

The technique by which the people come to a decision on any particular political question, in other words, is always of subsidiary importance, at least the way I see it. First, we need to have an efffective assertion by the people themselves that it is they who will be making the decisions.

"Deliberative Democracy" is a great technique, if used by the people in that way, but I can't help but note that our Constitution sets out another system, a pretty complete formula for making democratic decisions by way of a federal, representative system. It doesn't seem to be working very well now.  So, what to do? Maybe we should fix that system first, before looking for a workaround, built on a different premise.