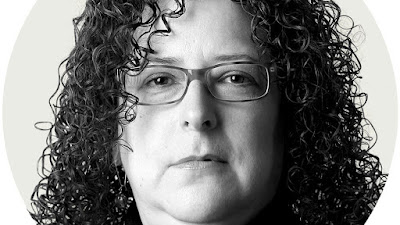 You are looking at a picture of Margalit Fox. I wouldn't be surprised if you never heard of her. I hadn't heard of her until I read an article announcing Fox's retirement in the June 28, 2018, edition of The New York Times.

For fourteen years, Fox wrote obituaries for The New York Times. More than 1,400 of them, she tells us. Fox calls this job "the best beat in journalism," and she says it was much better than her previous job as a copy editor. Fox was a copy editor for The Times when a job opened up in the obit department, and she jumped to apply. The article outlining her career in obits is quite engaging, and points out why she loved the job so much:

Obit writers chronicle the lives of the world’s movers and shakers, of course — the presidents, kings and queens, and captains of industry. These obits are required reading, but they rarely produce those exquisite frissons of pleasure that come from reading (or writing) about something wondrous and strange. And so it is the frisson-makers — history’s backstage players — whom we writers love best of all. Those unsung heroes and heroines are rarely household names. Yet in ways large and small, they have changed history: They are people who, for good or ill, have put a wrinkle in the social fabric.

I was struck by one of the things that Fox did not like about copy editing, and that moved her to the obit department. Fox was concerned that her own obituary, if she died as a copy editor, would read as follows:

As an adjunct professor at the University of California, Santa Cruz, I teach a "Capstone" course for graduating seniors in the Legal Studies Program. In that capacity, I read their theses, all of which relate, in some way, to privacy, technology, or freedom. The theses are almost always fascinating; it is a privilege to be able to read them and to provide my reactions to the students.

However, the phenomenon of the "run-on sentence" has reached pandemic proportions and is profoundly discouraging to any reader who cares about good grammar, and that definitely includes me. Let's recast what I just said as a run-on sentence:

The theses are almost always fascinating, it is a privelege to be able to read them and to provide my reactions to the students.

You get the point, no matter which way the sentence is presented, but without the semicolon, my sentence violates an important rule of grammar, and presents itself as a "run-on sentence." Take heed and avoid this error!

When I read senior theses, I unfortunately encounter a lot of run-on sentences. I don't think I am yet up to 50,000 conversions of commas into semicolons, which is probably the easiest way to fix the improper comma splice, but I can see why Fox would have jumped at the chance to avoid having to make those (infuriating) changes, day after day, time after time.

Moving to obits may actually have saved Fox's life. Long before she got to the 50,000 comma mark she might well have just jumped out the window in despair!