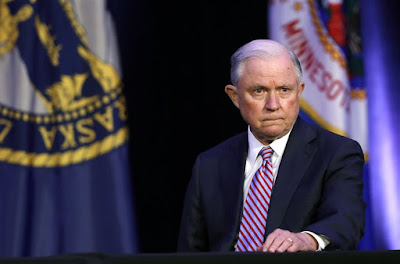 Writing in The Washington Post on August 24th, columnist Dana Milbank had something nice to say about Jefferson Beauregard Sessions III, the Attorney General of the United States of America.

Our president, as you may remember, has told Mr. Sessions on several occasions that the Attorney General should do something to stop the current investigation of the President (not because there isn't any justification for the investigation, but just because Mr. Sessions ought to be loyal to the person who appointed him).

Milbank celebrated Mr. Sessions' comeback to the latest of these Trump statements:

“While I am attorney general, the actions of the Department of Justice will not be improperly influenced by political considerations” [Sessions] said in a statement. He added that he is “proud of the work we have done in successfully advancing the rule of law.”

I am hoping that the public understands that our nation does have to operate on the basis of a "rule of law." We definitely need to do that if we want to maintain our system of democratic self-government.

Frankly, the news is not terribly encouraging. People seem to be forgetting what it means to run the country on the basis of a "rule of law." It means that those who are in positions of political power (those who have been given the right to "rule") have to follow the law, just like everyone else, and they don't get any special privileges. The whole idea is that it is the law that "rules," not the officials we select to administer the law.

As I read yesterday's pile of newspapers, I found three instances in which elected officials, and/or their attorneys, seemed to indicate that they believe that elected officials should not have to obey the laws that apply to everyone else, and that office holders should get excused from their crimes:

In each of these cases, the elected official felt comfortable in asking for political special treatment, just because of the official's position.

I am generally not a fan, but I have to agree with Dana Milbank. Score one for Jeff!