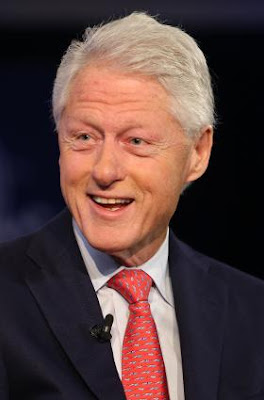 
When I read yesterday's edition of The New York Times (which I read after having posted to this blog), I felt like I received an instant, and condign, rebuke*. Bret Stephens, writing on "Sex, Lies and Presidents," said this about the Clinton impeachment hearings (emphasis added):

Liberals now calling for Trump’s impeachment ought to rethink the excuses so many of them made for Clinton 20 years ago. That it was “just sex.” Or that “lying about sex” doesn’t rise to the level of an impeachable offense (even if it’s lying about sex under oath). Or that “character doesn’t matter” so long as the administration produces peace and prosperity. Or that the motivating animus of the president’s critics is reason enough to dismiss the criticism.

These excuses were toxic not because they had no merit, but because they sidestepped the core of the issue: that the survival and ennoblement of democracy depend on holding people in high office to higher, not lower, standards.

Clinton’s supposedly “small” lie about sex (like Trump’s “small” violation of campaign finance laws) was not so small coming from the one person uniquely entrusted to uphold and enforce the law. It sent a signal that lying would be politically acceptable and legally tolerated. Clinton’s lawyerly prevarications helped create the truth-optional standard by which the Trump presidency operates. The claim by Clinton’s defenders that his job performance immunized him from impeachment sowed the seed for Trump’s remark, in an interview with Fox News this week, that “I don’t know how you can impeach somebody who has done a great job.”

Then, too, the Clinton machine’s relentless efforts to delegitimize the independent counsel by claiming Starr had gone far beyond his original remit to investigate the Whitewater case mirror the Trump machine’s attacks on Robert Mueller today.

Yet what Starr did then is what Mueller and other prosecutors are doing now: uncovering wrongdoing where they find it. That Trump’s hush money to two women has nothing to do with Russia makes the wrongdoing no less contemptible, illegal — and, because it’s about the president, impeachable.

Because the Clinton impeachment saga is still relatively recent, it’s been depressing — and instructive — to watch the two sides in that drama conveniently adopt the other’s former rationale for their own partisan convenience. (Lindsey Graham, this means you.)

But anyone who now calls for Trump to be judged severely should acknowledge that we would have been in a better place today if Clinton hadn’t been so fervently defended back then. Among other things, it might have dissuaded other sexual predators and congenital liars from running for high office.

We can still get it right. Some intellectual consistency would go a long way.

I really believe I stand corrected. I don't want to be associated with any claim that when the President of the United States lies (particularly under oath), that such lying is in any way "ok." We can't allow any of our elected officials to operate under a "truth-optional" standard.