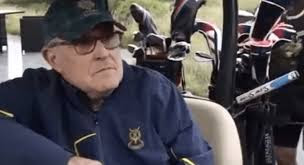 Rudy Giuliani (that's him in the golf cart) thinks there would be a "revolt" if President Donald J. Trump were impeached.

Philip Bump, who writes columns for The Washington Post, thinks Giuliani may be right.

In the meantime, Tom Steyer, the California billionaire who is bankrolling the "Need To Impeach" movement, advertises that 5,657,265 Americans have joined him in calling for the impeachment of President Trump (that is the number as of the time I am beginning to write this edition of my blog). Steyer provides this justification for impeachment:

I think Steyer is absolutely accurate in what he says about President Trump. I also think that Bump makes a good point about how the larger public and Trump supporters, in particular, see this clamor for impeachment. Given how many see this matter as pure "politics," Steyer's efforts may be counterproductive.

"Impeachment" is a constitutional remedy, and it is serious. It is a two-stage process. The House of Representatives first votes on whether or not to bring charges. If a majority of the House votes for impeachment, the Senate then holds a trial on the impeachment charges sent to them by the House. A two-thirds vote of the Senate is needed to convict. If the Senate convicts, then the president is impeached and is removed from office. So far, only three presidents have ever been subjected to this impeachment process, and no president has ever been convicted and removed from office by impeachment.

President Richard Nixon, the second president to be subjected to the impeachment process, resigned before he could be convicted. He was accused of obstruction of justice, abuse of power, and contempt of Congress on the grounds that he had not provided the Congress with materials that the Congress had demanded, as Congress was investigating charges that the president had personally directed the burglary of a Democratic Party campaign office. The House did vote to bring charges against him. Reportedly, President Nixon was informed by Senate leaders that he would lose if a trial in the Senate went forward. He resigned before the trial began.

Most recently, in what has generally been regarded as an inappropriate and "political" use of the impeachment process, President Bill Clinton was subjected to the impeachment process on the grounds that he lied and obstructed justice. The underlying facts, leading to these official charges, were that the president had engaged in sexual relations with a White House intern. That was the truth, of course, and though the president did lie about it, millions of Americans (not necessarily endorsing the president's actions but who generally supported President Clinton's politics) did not really think that this conduct merited his impeachment. Although he was impeached, and subjected to trial in the Senate, President Clinton was not convicted. That verdict, acquiting the president, gave us "Move On," a political organization still active in American politics. The "Move On" name perfectly captured how the nation felt about the political activity that preceded the President's impeachment. Lots of people felt, in other words, that the whole enterprise had been nothing more than political gamesmanship.

If evidence is brought forward showing that President Trump took illegal actions to turn the 2016 election in his favor, in collusion with Russia or otherwise, then that would indicate a direct and illegal effort to subvert our system of democratic self-government, and that would make a possible impeachment of President Trump look a lot like the impeachment of Richard Nixon. So far, however, the clamor for impeachment seems to many, and to those who like President Trump's politics, in particular, to be a lot more like the Clinton impeachment effort than the Nixon impeachment effort. The impeach Trump effort is fueled by a strong feeling of personal dislike for the president (which Democrats think is justified, and which many Republicans do not).

Maybe there substantial evidence of Trump's impeachable misconduct will be brought forward, but such evidence has not yet been produced. The fact that over five million Americans are calling for the impeachment of President Trump, prior to the production of any firm evidence of illegal action on his part, gives credence to the claim that it's all "political." I don't think this helps.

I don't think we should impeach a president for being personally disgusting (or for having sex with an intern, for that matter, which many would consider personally disgusting in and of itself). In a system of democratic self-government, we need to be willing to admit our mistakes. If we have just made a big mistake in the 2016 election and have picked a bad president (and we surely did that, in my opinion), we have some more elections coming up that will permit us to correct the error. If the president can be shown to have broken the law, to gain victory in the election, or otherwise to have committed significant crimes, then that, of course, is a different thing.

As of the time I am finishing this blog posting, the "Need to Impeach" petition has 5,657,715 signers, 450 more signers than when I began writing. Hundreds of people are signing this petition each hour. If and when it is time to impeach President Trump, his impeachment should proceed on the basis of charges, backed by evidence, that will allow reasonable people to believe that his crimes really do merit removal from office and that two-thirds of the United States Senate should vote to convict him.

If we are not there yet, then I'd say we should drop the subject until we are! Gathering signatures urging impeachment, before the evidence is produced, will undermine the integrity of the process. If and when evidence of significant crimes is actually forthcoming, that's when the American people should start asking for impeachment. Until then, there is no "need" to impeach. There is just political dissatisfaction on the part of those who don't like the president personally, or who oppose his politics.

I would say it would be good to put away those petitions for awhile.