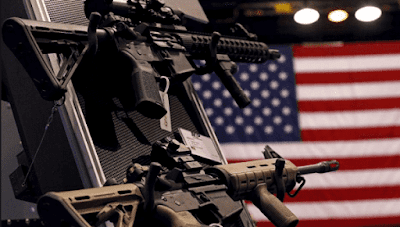 Alexander Benard is a visiting fellow at the Hoover Institution, located on the campus of Stanford University. In "real life," Benard is the managing partner of an American private-equity firm focused on Asia and Africa. Here is Mr. Benard's advice for our country:

His argument? Everyone else (Russia and China, specifically) is doing it, so we had better not miss out. Our scruples about arming authoritarian regimes, who will use the arms against their own people,  or for some kind of military adventurism, or even against the United Startes, misses the mark, because "the market" rules all. Where there is a "demand," a "supply" will be forthcoming, and if the United States doesn't fill the need, then the market demand for high-grade military equipment will filled by "more assertive and less scrupulous rivals."

Those who will be killed by the armaments probably don't care which country manufactured the missles, bombs, bullets, and the guns that blew them up or otherwise put them under the ground. Having any "scruples" about contributing to the death of others is just not "tough-minded."

Here is my thought, not really based on the "moral" considerations that Benard so casually sets aside. I think that when a nation bases a significant part of its economy on equipment that will destroy, not build, it weakens itself, and everyone else. The United States has an amazingly productive economy. It is so productive that we don't notice, as much as we otherwise might, the "opportunity cost" of deciding that we will spend so much of our productive capacities designing, building, selling, and using machinery that is designed to tear down the cities and the other infrastructure that supports civilization. I think we are still the world's number one arms dealer, despite Benard's misgivings, but check out our deteriorating roads, dams, bridges, and the failure of our system to provide health care and the opportunity for a college education to everyone in our society.

Our devotion to the military is sealing our doom. Chris Hedges, in fact, opines that America is a "failed state." His article in Truthdig, quoting John Ralston Saul, says that an “unholy trinity of corruption, impunity and violence” can "no longer be checked."

I reject the "can no longer be checked" conclusion, since there is always the opportunity to do something unexpected, something "revolutionary," in fact. We can still do that, here in the United States. And maybe we will. But if we simply extrapolate from what's happening now, that "failed state" label might well be apt.

Selling more guns and bombs is the way forward? Really? Forward to what?