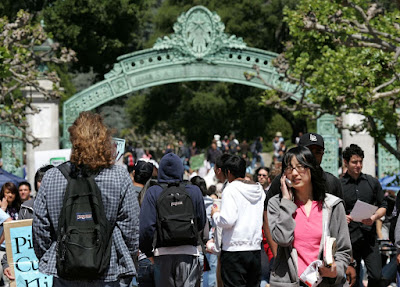 The Wall Street Journal is suggesting that we should be "rethinking college." A book review in The Journal, on July 18, 2018, advanced the following criticism:

Higher education is in a lot of trouble, barely kept on track by massive price increases, grade inflation that keeps the mostly inattentive customers sedated, and a class of academic serfs, called adjuncts, who work for meager wages. The adjunct system is telltale: a classic bait-and-switch operation, wherein customers—that is, students and their parents—imagine that, for the money they are paying, they are accessing professors though they are mostly renting local substitutes.

Speaking as one of those "local substitutes" and "academic serfs," since I do work as an adjunct professor at UCSC, I believe there is some merit in this critique. Continual price increases, foisted on students who don't have many personal or family resources, require those students to incur significant debt in order to get access to higher education. These ever-higher prices are undermining our educational system, and are crippling the future of those debt-ridden students.

The academic product being delivered, at the ever-escalating prices being charged, is also not up to past standards. The "adjunct" system does have some real problems, though I don't agree that things are quite as bad as The Journal suggests (at least not from what I have seen at UCSC). I am the holder of a J.D., not a Ph.D, but I do think I know quite a bit about government and politics, and that I am delivering at least some significant value to the students who take the classes I teach in the University's Legal Studies Program.

Still, I actually do think that students would benefit from having more contact with professors who have a deep, academic familiarity with the subjects being taught, and I do think that they come to college expecting that (and sometimes don't find it).

The main critique mounted in The Journal's book review, however (and in the book being reviewed, The University We Need, by Warren Treadgold) is not the complaint outlined above. Here seems to be the actual concern:


The campus left has tightened its grip on college and universities. The tighter the grip ... the simpler the message—that Western civilization, including the history of the American republic, is a long narrative of oppression. The essence of the humanities has thus been transformed into the study of victim groups and their supposed oppressors—capitalism, colonialism, religious belief, “privilege”—at the expense of other subjects. Relatedly, the demand for “diversity” now drives the curriculum, not to mention the admissions process.

One result of this approach has been, Mr. Treadgold says, a growing intolerance toward traditional points of view—including incidents of confrontation and virtual censorship. Another is a growing anti-white sentiment. Arguably, the sentiment was latent in the early stages of identity-politics protests, but it has become overt in recent years, with attacks on “white privilege” and courses deriding “white culture.”

Too much focus on "diversity!" That is basically the problem that The Journal and professor Treadgold identify. In my view, this critique is almost totally wrongheaded.

"White culture" is not an endangered species. "White privilege" is an historical and still-extant reality. History, including American history, has treated people of color badly, here at home and elsewhere. A genuine education requires that we all confront these realities, and discuss them, and understand both our history and our current situation, taking these real facts into account. The faculty at UCSC, by the way, are definitely trying to do just that in the classes I know about - and are succeeding, too. I don't read this educational effort as "the left" tightening its grip on colleges and universities. But let me go on.

My real concern about The University We Need is its prescription for change. After providing what I think is a flawed analysis, Treadgold provides the following suggested solution to the hypothesized problem: Treadgold wants "the billionaire class" to establish new, private universities that would try to teach courses that don't let the students know that there has been a long history of oppression of people of color by white people.

Candidly, this is not going to equip anyone who gets this kind of education to function well in our contemporary world. Trying to erase the facts, in the name of an ideology, is exactly the opposite of what genuine education is all about. The Journal accuses "the left" of trying to do that, and to the extent that this happens, it is wrong. But what is being proposed by professor Treadway is to mobilize exactly this kind of education as ideology. His proposal is even more horrible in that he explictly calls for the creation of private institutions, built on the enormous wealth of the 1%, which will never have to have any public accountability.

Should we want to "rethink college?" That's not a bad idea! But instead of asking new high-tech billionaires to set up quadrangles of privilege, in which young, rich white people will be shielded from the real world, how about trying the prescription advanced in a recent study by the Century Foundation. The idea is summarized in an article in a July 19, 2018, article in Pacific Standard.

What is this solution? Making college free!!

That approach, not the exclusive educational preserves promoted by The Wall Street Journal, is what this nation needs.