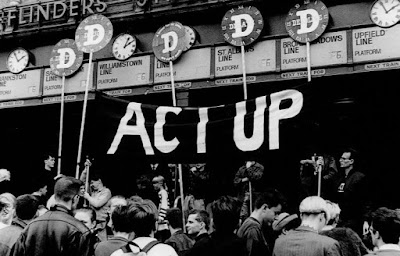 The recent New York Times Magazine article on how we almost (but didn't) confront global warming in time to save the Earth was not very "upbeat." I wrote about this article in my blog post last Sunday,  and gave my post the following title: "A Long Article About The End Of The World." I not only referenced The New York Times' article but accompanied my post with a link to The Byrds'  wonderful song, "Turn! Turn! Turn!" That song ends with the following assertion: "I swear it's not too late."

A number of my friends said they hoped I was right about that, and that there is still enough time to save the Earth. The Times article made a pretty good case, though, that it really is "too late."

I had three thoughts, on Sunday afternoon, as I continued to think about the question:

I read a little bit, on Sunday afternoon, about "ACT UP," the AIDS Coalition to Unleash Power. This was a political movement. In a way, it came out of "nowhere," and it profoundly changed our world. The actions of the LGBTQ movement have changed our world, too. I suggest that what these political efforts have accomplished is not only "surprising" but inspiring. These movements provide evidence that we can, indeed, "change the world," and surprise ourselves as we do so.

With the fate of every human being on the planet hanging in the balance (and The Times' article does make clear that this is exactly the situation in which we find ourselves), it is obvious to me that we need to muster the will to make real changes in how we live, and that we need, also, to reevaluate what may have been our plans for the rest of our lives.

Let us all start thinking about how we can "surprise ourselves" now.

"Action" will be needed. We will need to create a "political" movement, as ACT UP did.

When we do start "acting up," I am absolutely confident that we will discover this:

Many Surprises Are In Store