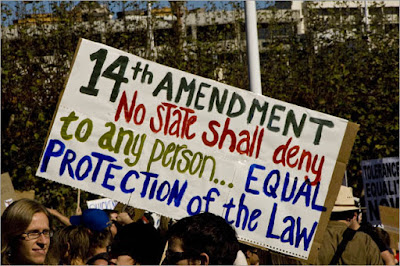 On the Fourth of July, The New York Times ran an editorial titled, "The Promise of the 14th Amendment." I recommend this editorial! Just click this link.

In the online version of the editorial, the headline makes a statement and then asks a question: "America Started Over Once. Can We Do It Again?" Good question!

We hold these truths to be self-evident, that all men are created equal, that they are endowed by their Creator with certain unalienable rights, that among these are life, liberty and the pursuit of happiness. That to secure these rights, governments are instituted among men, deriving their just powers from the consent of the governed.

As the Times' editorial so properly states:

The original Constitution of 1787 was, for all its genius, a deeply self-contradictory document — a charter by and for a free people who enslaved hundreds of thousands of others. In 1776, America’s founders declared that human equality was not only a self-evident truth, but a fundamental premise of their new nation; barely a decade later, they officially rejected that premise, writing inequality and subjugation directly into the Constitution.

The 14th Amendment, following the Civil War, made the promise that our nation would be rededicated to the proposition that we are all "created equal," and that we are all endowed with with "unalienable rights," among which are "life, liberty and the pursuit of happiness."

That was a great promise, and we have seen at least some, but not enough, follow through.

The Times tells us that America started over once before. It asks us, can we do it again? That is a very good question, and I think it's time to try! As I put it in my own Fourth of July posting, it is time to "Return To The Revolution."

The Fourth of July and the Fourteenth Amendment. Good start!