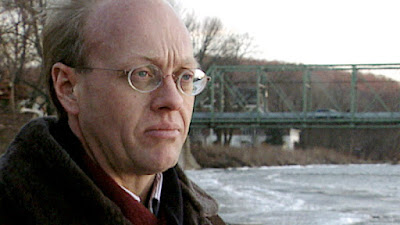 Chris Hedges, pictured above, is a Pulitzer Prize-winning political commentator who warns us on a frequent basis that we are living in "an inverted totalitarian state." Hedges faithfully reminds us that our nation is pursuing a modern variety of imperialism and that we have convinced ourselves that our imperialistic actions are motivated by, and justified by, our self-proclaimed "good guy" status. Hedges routinely, and properly, decries our massive investment in, and our devotion to, war and the military, which are hugely damaging to our democracy. As a contrarian, Hedges is often quite irritable and dyspeptic as he dispenses this invaluable advice.

One of Hedges' recent commentaries in TruthDig was titled, "Et Tu, Bernie?" This opinion piece provides a good example of Hedges' irritability and dyspepsia. In the article, Hedges "goes off" against Bernie Sanders, calling him "a loyal party apparatchik," who has squandered "his legacy and his integrity."

The article is worth reading, painful as it is to someone like me, who strongly supported Sanders' presidential campaign in 2016. Some might think it a bit overwrought, but there is a point well made, or so I believe.

What is most worth thinking about in Hedges' article is not the status of Bernie Sanders' integrity. Rather, the article ought to suggest to us that we can never rely on someone else to do our democracy for us, no matter how principled and imbued with integrity she or he might be. Democracy, in other words, is a definite "do it yourself" project. If anyone thought that Bernie Sanders would do it for us, that person will be disappointed. I think Hedges is right about that.

"I never had much faith in leaders,” Debs said. “I am willing to be charged with almost anything, rather than to be charged with being a leader. I am suspicious of leaders, and especially of the intellectual variety. Give me the rank and file every day in the week. If you go to the city of Washington, and you examine the pages of the Congressional Directory, you will find that almost all of those corporation lawyers and cowardly politicians, members of Congress, and misrepresentatives of the masses—you will find that almost all of them claim, in glowing terms, that they have risen from the ranks to places of eminence and distinction. I am very glad I cannot make that claim for myself. I would be ashamed to admit that I had risen from the ranks. When I rise it will be with the ranks, and not from the ranks.”

I value Hedges' social and political analyses, but I am not buying into Hedges' dyspepsia in this case. I am not going to question Bernie Sanders' integrity.

There is a problem, in politics, with relying on leaders who will end up disappointing us, in various ways. To insulate ourselves against this experience, I am going with Dylan and Debs!