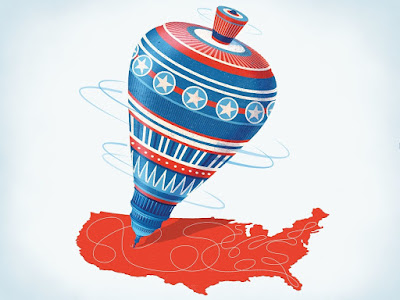 Yascha Mounk writes about the "nationalization" of American politics in the July 2, 2018, edition of The New Yorker. Mounk is a Lecturer on Government at Harvard University, a Senior Fellow at New America, and a columnist at Slate. His article in The New Yorker is titled, "McPolitics." His latest book is titled, The People vs. Democracy: Why Our Freedom Is In Danger & How To Save It. Presumably, this book deals with the "crisis of liberal democracy and the rise of populism," since Mounk's website says that Mounk is "one of the world's leading experts" on that topic.

I have always found self-proclaimed statements about one's expertise to be a bit off-putting, but I can vouch for "The Rise of McPolitics," which is the title that was given to The New Yorker article as it was transformed from the hard-copy magazine version ("McPolitics") into the version available on the Internet.

I think that Mounk's article is worth reading. I recommend it. Among other things, it convinces me that "local" politics is important, perhaps supremely important, as we seek to save our imperiled democratic institutions.