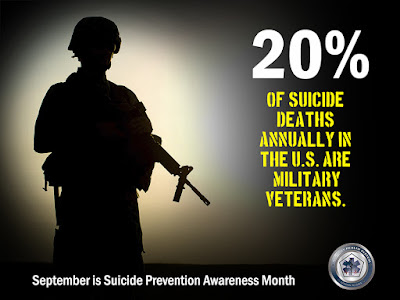 A recent article in Consortium News, suggests that "America’s Gun Violence Epidemic May Have Roots in Overseas War Zones." The article advances the theory that those who have fought in wars may, in many cases, have suffered from a "moral injury" that then leads them to commit suicide. According to the article, sixty percent of gun deaths in the United States are suicides, and veterans are disproportionately represented in these statistics. If the article is correct, twenty veterans, on the average, commit suicide every single day.

If you'd like to think some more about "moral injury," you can click this link for a video that discusses the phenomenon.

The title of the article I am referencing here also prompts another thought worth thinking. If we continually see those whom we consider to be "heroes" mowing people down with machine guns (and we pretty much do see that, almost everywhere, in movies and on the evening news), I think that the behavior being modeled gives direction to those who are feeling the need, for whatever reason, to strike out at situations, and people, who aggrieve them.

In a world in which "anything is possible" (and that is the world in which we live), we pick up ideas about what we, individually, ought to do from reviewing the examples at hand.

If those whom we admire, and those whom we call "heroes," were showing us something besides gun violence, we might find that those who are seeking examples of how they should conduct themselves would not pick gun violence as a model.

The "moral injuries" inflicted by our military activities, in other words, affect those who never fought or served in the armed forces. We are all injured by our nation's dedication to the military actions portrayed everywhere, telling us that "service" means killing other people and that violence and death are to be applauded as heroic.