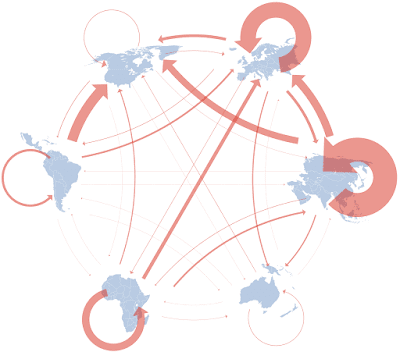 On June 23, 2018, The New York Times ran an article on immigration, "Migrants Are on the Rise Around the World, and Myths About Them Are Shaping Attitudes." The article is well worth reading.

I found the comparison between various population flows in 1990 and 2017 to be particularly thought-provoking. Do we live in one world, or not? If we do, then it stands to reason that population flows will reflect both human desire and the political, social, and economic conditions (both positive and negative) to which humans respond.

Considering recent xenophobic tendencies in United States politics, I think we need to find a more "positive lens" to look at international migration coming our way. It is a net gain for us, not a net loss, is what I'm thinking.

For those who come to the opposite conclusion, I'd like to point out that most people do not want to leave their homes to go somewhere they have never been, where different languages are spoken, and where different religious and cultural rules apply. So, if the United States of America were interested in reducing immigration, then it would be to our great advantage to prevent this kind of thing from ever happening again, anywhere in the world. In fact, we're doing this: