The picture above shows a photo taken during the construction of a new apartment complex located in the City of Santa Cruz. This new structure is actually a lot bigger than it appears here. The development is about twice as long as what is shown and contains ninety-four units. The developer calls it Five55.

The development is located at 555 Pacific Avenue in Santa Cruz (right where Pacific Avenue runs into Front Street), and this street address accounts for how the developer came up with the upscale name. The new apartments are being presented as "luxury living." The photo below, from the news story reporting on this new development, shows the kind of glamour look that the developer is counting on to market his rental units. 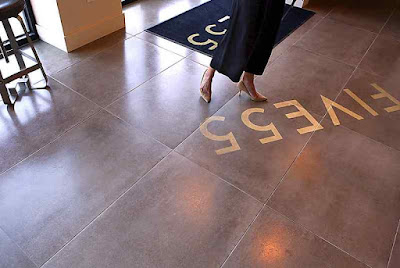 As for the rental units themselves? Well, they are not exactly big, and they are certainly not "low rent." The prices, at least, if not the actual apartments, are definitely found at the "luxury" level.  Here is some data from the news story in the Santa Cruz Sentinel:

Apparently, the website for the development actually quotes higher prices. If you are thinking that a 440-square foot studio apartment is a bit small to qualify as "luxury" quarters, the developer's spokesperson says "not to worry."

Right! That's it! Nobody actually spends much time indoors! In fact, it seems that lots of people are choosing to live on the streets!

So, who can afford to live at Five55? Let's quote the Sentinel article again: "If you go by the longtime rule of thumb to pay no more than 30 percent of your income for housing, you’d have to earn $108,000 a year. We need to get on the bus to Google,” said Donna Musselman, a workplace consultant who lives in Santa Cruz.

The Santa Cruz City Council eliminated a requirement that the new complex had to provide affordable, "inclusionary" units that average wage earners could afford. It's clear that this development is not aimed at addressing the City's affordable housing crisis. The housing is aimed at high-tech workers in the Silicon Valley, who don't live here now, not our local workforce. John Burroughs, Lighthouse Bank chairman, says, “Must be a lot of people want to live here.”

Well, Duh! So, let's build housing for all those upper-income people who would like to relocate to our community, instead of providing for our own local residents and their kids? Is that our plan?

In fact, the City of Santa Cruz doesn't need "luxury living." The City needs price-restricted units that will be permanently affordable to persons with average and below average incomes (as measured by the average income in Santa Cruz, not in the Silicon Valley).

Some people claim that "more housing" is the answer to the City's affordable housing crisis. Just build more high-rise apartments and everything will get better. Prices will come down! Isn't that what the "law" of supply and demand says will happen?

Well, based on what we're seeing here, that isn't the way it actually works. If you adhere to the "let's just build a lot of market rate housing" view, why don't you just hop on over to "Five55?" Maybe you can pick up one of those 636-square foot "luxury" models.