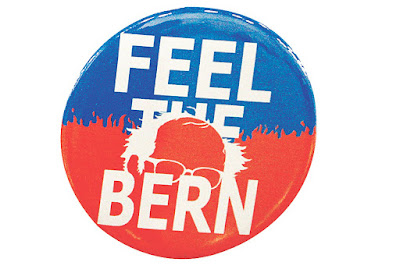 The Wall Street Journal, bastion of our corporate and capitalist culture, published a book review on Saturday, May 26, 2018, that commented on Bernie Sanders' book, Our Revolution.

Barton Swaim, the reviewer, is the opinion editor of The Weekly Standard, which bills itself as "unapologetically conservative." As might be expected, Swaim's commentary raises doubts about Sanders' political efforts, with Swaim's key point being as follows:

The book ... dwells mostly on his 2016 presidential run and his political vision: a $15 minimum wage, fully subsidized higher education, a nationalized health system and so on ... His writing, much like his talk, is clear and direct.

There is in my view a fatal contradiction at the heart of Mr. Sanders’s worldview: He holds democratic self-rule to be sacred and inviolable, but he’s prepared to transfer enormous power to a coercive and impersonal government that cares little for the people’s will. Near the beginning of the book Mr. Sanders recalls the “profound lesson about democracy and self-rule” he learned as a boy on the streets of Brooklyn. “Nobody supervised us. Nobody coached us. Nobody refereed our games. We were on our own. Everything was organized and determined by the kids themselves. The group worked out our disagreements, made all the decisions, and learned to live with them.”

Swaim clearly brings a built-in set of blinders to his evaluation of what Sanders has to say, since Swaim seems to believe that it would be impossible to achieve the kind of policies Sanders is advocating without transfering enormous power to a "coercive and impersonal government."

But is that true? Sanders, after call, comes from Vermont, where small-scale, citizen-based government is an actual reality. It may be that Swaim is missing what the real "revolution" that Sanders is calling for would be all about. In my opinion, our current government (to which Swaim notes no objection) is both "coercive" and "impersonal," and it "cares little for the people's will."

I agree with Swaim that entrusting "enormous power to a coercive and impersonal government" would be terrible. However, that is precisely what has already happened in this country, and any genuine "revolution" will be achieved only by the restoration of what Sanders is calling "self-rule," and what I like to call "self-government," a government in which we (ordinary people) are engaged ourselves.

If you are concerned about "ceding enormous power to a coercive and impersonal government," it's clear that "revolutionary" changes are required right now. The big, impersonal, and coercive government already in place in the United States, a government that is of, by, and for the corporations, must be dismantled and discharged!