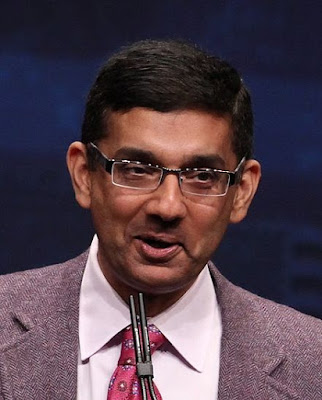 On May 20, 2014, D'Souza pleaded guilty in federal court to one charge of using a "straw donor" to make an illegal campaign contribution to a 2012 United States Senate campaign, a felony. On September 23, he was sentenced to eight months in a halfway house near his home in San Diego, five years probation, and given a $30,000 fine. On May 31, 2018, D'Souza was issued a full pardon by President Donald Trump.

Stephen Vladek, a Professor of Law at the University of Texas School of Law, made an immediate comment on this presidential pardon. In a May 31st posting on the NBC News Think website, Vladek confirms that the Trump pardon was "legal," but he also says that the president's "willingness to subvert the process is dangerous."

What "process" is Vladek talking about? After all, as Vladek admits, the president "has the clear constitutional authority to pardon just about anyone (perhaps other than himself) for prior federal crimes." I don't think that this statement comes as a surprise. You don't have to be a law professor to understand that a virtually unlimited power to pardon goes with the presidency.

So, what "process" may the president have "subverted?" Vladek explains it this way:

What’s different about the D’Souza story — like each of the president’s four prior pardons, to Joe Arpaio, Kristian Saucier, Scooter Libby and Jack Johnson — is that the president is reportedly going it alone, issuing his executive reprieves without going through the Justice Department’s Office of the Pardon Attorney, or following its regulations for pardon applications.

There is, in other words, an existing set of regulations, promulgated under earlier presidents, and followed by them. These regulations establish specific procedures and a "process" for determining how pardons should be evaluated and acted upon. Vladek's point is this:

By bypassing the well-settled rules and guidelines for pardons, the president is not just turning his back on a process that is designed to insulate pardons, as much as possible, from being abused for the president’s personal gain; he is ... “sending an extremely clear signal to his confederates and associates with his pardons of politically connected convicts that they will get their reward if they stay strong.” That’s a signal he is unquestionably allowed to send as a constitutional matter, but it’s also a signal that ought to be ringing a lot of alarm bells — especially on Capitol Hill.

In other words, our current president is again letting us know that he believes that his election to the presidency has granted him a kind of personal prerogative to do whatever he wants, and that the set of powers granted to him, as president, are his to exercise as he personally decides.

Constitutionally, that's probably right, in lots of ways. However, that view of the presidency suggests that the nation will not be operated according to what is often called the "rule of law." Instead, actions affecting the nation will be made, on a personal basis, by the president, unconstrained by rules and regulations.

Pardon me, but doesn't this sound more like a traditional monarchy than how government is supposed to work in a democractic republic?

That is what I think.

Check out Vladek's article. That seems to be pretty much what he is thinking, too.