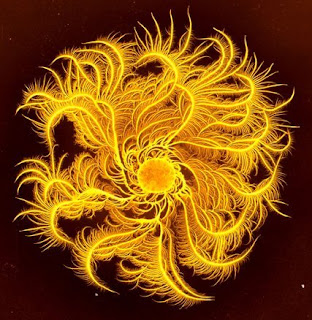 Pictured is a colony of Paenibacillus bacteria. The New York Times has an upbeat description of what we are seeing here:

For “simple” single-celled organisms, microbes often can seem as civic-minded as an Amish barn-raising crew.

They cooperate to mince unwieldy complex carbohydrates into bite-size pieces for all to enjoy. They share the artisanally crafted molecules needed to extract essential iron from their surroundings.

They jointly construct a kind of slimy tarp, a biofilm, on a convenient surface like a pond rock or your teeth, under which the microbes then safely hide. Through teamwork and constant chemical communication, microorganisms shape the world on which we macro-organisms preen.

That's the "good news" description of the Paenibacillus bacteria world. What about the bad news?

Jeff Gore, a biophysicist at the Massachusetts Institute of Technology, and his colleagues Christoph Ratzke and Jonas Denk, report that when a sample of Paenibacillus sp., a soil bacteria, is fed a diet of glucose and nutrients in the laboratory and allowed to grow at will, the microbes end up polluting their local environment so quickly and completely that the entire population soon kills itself off.

In essence, the researchers said, the microbes commit “ecological suicide.” The study was published in April in Nature Ecology and Evolution.

“The effect is so dramatic,” Dr. Gore said. “You have an exponential growth of the population followed by exponential death.” Within 24 hours of the onset of the death spiral, he said, “no viable cells were left in the entire culture.”

It’s not that the microbes had exhausted their resources: Food remained to feed on. But in gorging heedlessly on the glucose bounty, each bacterium had secreted a steady flow of acidic waste into the culture medium, until the ambient pH level had plunged lethally low.

Remind you of any organisms you know?