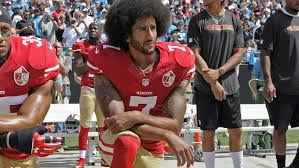 I would like to applaud David French's column in the May 26, 2018, edition of The New York Times. French is, among other things, a senior fellow at the National Review Institute. That means that French is what might be called a "right-winger," to use a well-known descriptor.

In his column in The Times, French took aim at what he denominated the "conservative hypocrisy" of the National Football League, which has recently promulgated a set of "anthem rules" that require N.F.L. contracted football players to stand for the national anthem or to stay off the field. Player and team penalties will be imposed for violations.

I want football players to stand for the anthem. I want them to respect the flag. As a veteran of the war in Iraq, I’ve saluted that flag in foreign lands and deployed with it proudly on my uniform. But as much as I love the flag, I love liberty even more.

French intimates, and I think correctly, that if the N.F.L.'s "anthem rules" had been promulgated by a governmental agency, the courts would find these rules to be a violation of the players' free speech rights, guaranteed by the Constitution. The Bill of Rights, however, only applies to prohibit governmental actions that contravene its guarantees. In the commercial marketplace, the rules are different. If you want to get the big bucks provided to N.F.L. athletes, you are going to have to toe the line set by the corporate owners who establish the contract terms. That's a generally accurate description of how the law differentiates between governmental and non-governmental actions.

Let's get creative, though, in the face of what French calls a kind of corporate mob mentality. I teach a course at the University of California, Santa Cruz that covers, among other things, contract law. Here is a quick statement of basic contract law, pulled from the Internet (emphasis added):

Contracts are legally binding agreements between two or more parties and are made up of six elements that must be present for a contract to be considered enforceable.

The six elements include:

Shouldn't basic guarantees found in the Bill of Rights be considered to be important statements of public policy, and "unwritten societal laws that all citizens are expected to follow?" If so, isn't there a good argument that contracts that contravene traditional free speech rights are in violation of public policy, and that any such contractual provisions are, for this reason, void?

I don't know whether or not this argument has ever been made, but it's certainly an argument I would like to see made in this case. Maybe Colin Kaepernick should amend his current legal claim against the N.F.L. to make this point. Corporate power should be limited, just as governmental power is limited, to protect "liberty." What the Constitution requires from the government, in terms of protecting the right to free speech, should be required from the corporations, too, as a matter of fundamental "public policy."

Here's a last word from French:

In our polarized times, I’ve adopted a simple standard, a civil liberties corollary to the golden rule: Fight for the rights of others that you would like to exercise yourself. Do you want corporations obliterating speech the state can’t touch? Do you want the price of participation in public debate to include the fear of lost livelihoods? Then, by all means, support the N.F.L. Cheer Silicon Valley’s terminations. Join the boycotts and shame campaigns. Watch this country’s culture of liberty wither in front of your eyes.