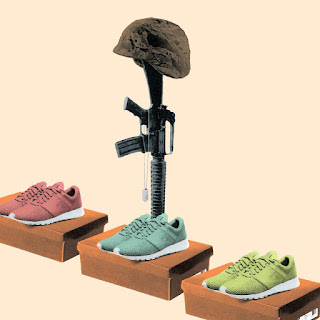 On April 15, 2018, The New York Times ran a story on the first page of its "Sunday Review" section that was headlined, "The Warrior At The Mall." The author of this opinion piece, Phil Klay, has written a short story collection called Redeployment. Klay is a veteran of Dartmouth College and the United States Marine Corps.

Klay tells us what soldiers are saying, as they carry out their duties in postings to dangerous places like Afghanistan and Iraq:

We're at war while America is at the mall.

While we are at the mall, this is the kind of world we are creating, in the places where American troops have been deployed: 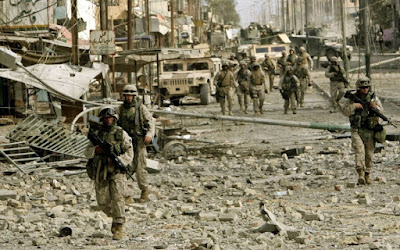 This kind of obscene destruction will stop when soldiers currently assigned to places like Iraq, Niger, Syria, and Afghanistan are redeployed to the mall, and when ordinary men and women are drafted and sent off to kill and be killed in these dangerous places.

I was a draft resister. I hate the military draft, but if the United States is going to deploy soldiers to foreign countries to destroy their shopping districts, and that's the choice our nation wants to make, then ordinary men and women should be removed from our own shopping districts and sent to do the job.

That, I think, would end a shameful era of American military intervention, because ordinary men and women would rather be at "the mall" than in Afghanistan. Or in Iran. Or in all the other places where soldiers like Klay are thinking just what Klay has reported.

It is popularly thought that the War in Vietnam was finally ended by public opposition to the idea that young American men could be drafted, against their will, to go kill people in a battle that virtually no one in the country, including the President, could justify or even explain.

I feel pretty confident that the same approach, if implemented again, would have the same result. Congress receives no pressure to end the unjustified military interventions in which America is engaged, because constituents are "at the mall."

If we had to do our own killing, we would not choose to do any killing at all.