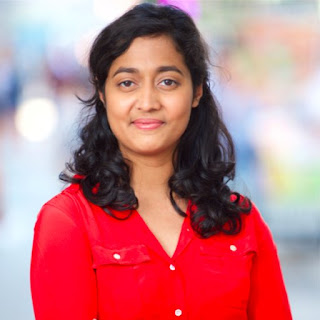 Pictured is Annafi Wahed, a self-described "bleeding heart liberal," who has been mentioned in this blog before. The headline on today's posting is Wahed's advisory to liberals (not mine). These words of warning are the headline to Wahed's recent column in The Wall Street Journal.

Wahed has created a political website called The Flip Side. Its mission is to "help bridge the gap between liberals and conservatives," by providing what the website claims to be "smart, concise summaries of political analysis from both conservative and liberal media." A subscription is free. I have not, as I write this, actually sampled the analysis Wahed is providing, but I do plan on seeing what The Flip Side has to offer.

Wahed's past affiliations include a stint on the campaign staff of the Clinton For President campaign. Allow me to say that this does not, automatically, translate into credibility with the kind of "liberals" who supported Bernie Sanders, just to take one example. Wahed's column, for the most part, bemoans the fact that her credentials as a "card-carrying member of the liberal elite" has not insulated her from hostile encounters with liberals.

Frankly, this should not be surprising to her. As you can probably tell, I am rather skeptical of Wahed's claim to be a voice for the "liberals," many of whom, myself included, see income inequality as the issue that should be front and center for "liberals" at this time. Wahed's past "six-figure salary at a Big Four accounting firm" is not translating into the kind of respect from liberals that she so evidently craves.

The main point Wahed makes is, nonetheless, worth taking seriously. I wouldn't phrase it as a "warning," so much, but as wise counsel for anyone who wants to be effective in politics. I do have some experience in that arena, and my "Five Simple Rules" for elected officials includes a "Rule #3" and a "Rule #4" that speak to this topic:

Rule #4: “Go Where You're Invited.” In other words, never be afraid to open up a dialogue and discussion with the people who didn't elect you. You might learn something. This is an antidote to Rule #3.

"Liberals," "progressives," and everyone in general, should definitely pay attention to what the "other side" has to say. In a democracy, our politics is built on the diversity and differences that reflect who we are.

You don't have to have had a six-figure salary to be able to figure that out!