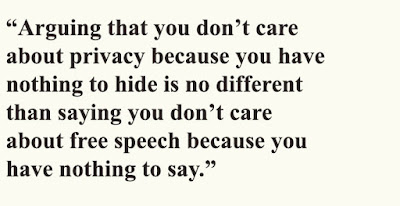 Glenn Greenwald, is "an American journalist and author, best known for his role in a series of reports published by The Guardian newspaper, beginning in June 2013." These reports detailed global surveillance programs being operated by the United States and Britain, and were based on classified documents disclosed by Edward Snowden.

Greenwald makes a great case for privacy. You can watch his persuasive TED Talk on the subject by clicking the link I have just provided, or by watching the video I have inserted at the end of this blog posting.

A comment by Willie Brown, in Brown's "Willie's World" column in the April 15, 2018, edition of the San Francisco Chronicle, reminded of Greenwald's rather clever way of demonstrating the hypocrisy of those who take the position that privacy doesn't matter if you have "nothing to hide." See the Greenwald video from minute 2:50 to minute 5:45.

The Chronicle inserts a powerful paywall on its online offerings, so non-subscribers might not be able to view Brown's column. The headline, online, is "Facebook’s Zuckerberg smooth-talked Congress. Only 1 senator got to him."

That Senator was Senator Dick Durbin, from Illinois, and here's what Brown reported about Durbin's dialogue with Zuckerberg:

The only time Zuckerberg got nicked was when Democratic Sen. Dick Durbin of Illinois asked the tech titan if [he] would be comfortable revealing the name of the hotel where he’d stayed the night before.

“Um, no,” Zuckerberg said after a pause.

“Would you share with us the names of the people you’ve messaged?” Durbin asked.

“Senator, no, I would probably not choose to do that publicly here,” Zuckerberg said.

Then Durbin made his point: That’s exactly the sort of information people fear is being sold on Facebook.

It was a soft but effective hit that both got a big laugh in the committee room and at the same time went [to] the heart of the issue.

Durbin's challenge to Zuckerberg was not unlike the point that Greenwald makes in the video below.

Forget about the statement that your privacy doesn't matter to you, if you have "nothing to hide."

Our privacy matters to each one of us, even including Mark Zuckerberg, who famously claimed, several years ago, that privacy was "no longer a social norm."

There are lots of good reasons we value privacy. Let Glenn Greenwald tell you all about it: