The United States government wants technology companies to provide a "backdoor" to any computer application, program, or device used in our country, to give government a guarantee that the government can always have access to everyone's data, even if a person has sought to encrypt that data, and to keep it private.

As it turns out, the government of Russia wants exactly the same thing! In an article in the April 19, 2018, edition of The New York Times, Neil MacFarquhar reports that the Russian government went after Telegram, which has designed and marketed a popular and secure messaging application. Telegram's commitment to encryption is robust, and its corporate symbol is a paper airplane (see above).

See below for a street scene in Moscow, where demonstrators threw paper airplanes, as a protest, at the headquarters of Russia's secret police. 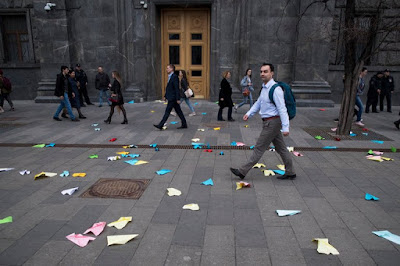 It would be hard to overstate the importance of this issue. The information each one of us keeps, in digital form, on our computers and cellphones, is generally equivalent to a complete record of everything we have ever done, thought, or said.

Even if you think you have "nothing to hide," Americans have always believed that the government can have access to our "persons, houses, papers, and effects," ONLY when we provide an affirmative consent to the government to have such access, or after a judge issues a warrant, based "upon probable cause, supported by Oath or affirmation, and particularly describing the place to be searched, and the persons or things to be seized."

That's quoting the Fourth Amendment, if you can't quite place the language.

Telegram, Apple, and other technology companies are trying to make it possible to provide genuine Fourth Amendment guarantees in a digital world in which this is increasingly hard to do.

I say, hats off to Telegram and all those companies fighting for secure encryption, with no "backdoor."

It is also nice to see that people in Russia are starting to figure out what we have known for something like 240 years!