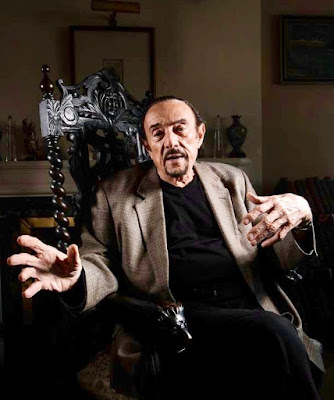 Dr. Philip Zimbardo (pictured) is sometimes thought of as "Dr. Evil." At least, that is how the San Francisco Chronicle characterizes him in a story that ran in its April 21, 2018, edition.

Zimbardo has had a long and distinguished career as a psychologist (he has written sixty books), but he is still best known for his "Stanford Prison Experiment," carried out at my alma mater in 1971.

If you don't know about this famous demonstration of how quickly ordinary people can be cajoled into barbarism (in other words, if you don't know anything about Hitler's Germany, or Abu Ghraib), just click the link I have provided. There is, in fact, a movie about the experiment that recreates the horror provoked by Zimbardo's role-playing exercise in the basement of Stanford's Jordan Hall.

Click the link for the trailer. You'll get the idea!

So far, there is no documentation that any classroom exercise has been successful in converting ordinary students into replicas of Gandhi, Martin Luther King, Jr., or Mother Teresa.  Nonetheless....

It is my strong belief, based on my personal experience, and not based on any scientific study, that people will usually respond to any situation in the way that they believe others expect them to respond. This powerful principle of human behavior is what motivated the students who participated in the Stanford Prison experiment to turn into sadists. I don't see any reason that the polarity of this powerful principle can't be reversed.

A long time ago, Thomas Carlyle wrote On Heroes, Hero-Worship, and the Heroic in History. He wrote Sartor Resartus, too, which pretty much makes the point I have outlined above.

As is true in every area of education, you don't actually need to take a college course to learn something. We can become "heroes," and inspire others in that direction, by starting to expect the best, not the worst, from ourselves and everyone we know.

We need to do this, particularly, with those with whom we disagree, and those whom we don't like very much!! Assuming the worst about people is an almost certain guarantee we will get the worst.

Let's try working in the opposite direction.