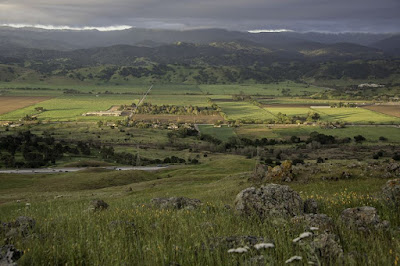 Pictured is Coyote Valley, located in Santa Clara County. As I learned from the latest edition of greenfootnotes, a quarterly bulletin published by Committee For Green Foothills, Coyote Valley is being threatened by an initiative measure sponsored by developers.

Measure B, which will be on the ballot in June 2018, bills itself as a way to provide affordable housing for seniors. The sponsors of Measure B have a specific development project in mind, which Measure B would essentially approve, if the Measure is enacted by the voters. However, the language of the initiative goes further than this single project, and would allow the conversion and residential development of any land designated for industrial or commercial uses and not yet developed. If you would like to find out more, you can click this link for an explanation of Measure B by the Committee For Green Foothills. Here is a link that would allow you to express your personal opposition to Measure B.

As I read the analysis of the Measure, which is clearly designed to sound appealing to voters, I thought of a simple rule to apply whenever a voter is confronted by an initiative measure proposing some sort of land use policy change or project approval.

Here is the rule: if the measure is sponsored by a developer, and focuses either on a specific project, or on land use policy changes, or both (as in the case of Measure B), you can be totally assured that the aim of the Measure is not to promote the public interest, but to promote the developer's interest.

I have had a good deal of experience with inititive measures, and I think that the formulation just outlined is correct.

Initiative measures sponsored by developers are intended to avoid the public hearing processes that allow significant public participation to affect the decision ultimately made. Where there are any problematic aspects to a development proposal, normal land use review procedures allow elected officials, after hearing from the public, to make changes to a proposed project. Utilizing an initiative, which asks for a direct vote of the people, is, oddly enough, a tried and true way for developers to avoid genuine public scrutiny.

If a developer proposes and qualifies an initiative measure to approve a development project or to make a land use policy change, just vote "NO."