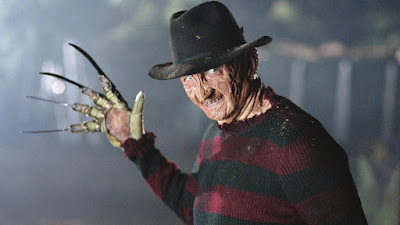 I began thinking about recurring nightmares (and horror movies) when I heard that there is another book out that rehashes "What Happened" during the 2016 presidential election. That election did give us a nightmare president who has a certain Freddy Krueger-like quality about him, slashing away at everything decent and good. By the way, that is Freddy pictured at the top of this blog posting. He is the main character in A Nightmare on Elm Street. At least, so I am informed.

Repeatedly trying to figure out how we could have ended up with a horror show president does seem like a recurring nightmare to me. How could this have happened? What went wrong? Why has this become our destiny? We keep asking ourselves about the election, and we keep trying to find some way to explain it. Hillary Clinton has written a book with her explanation, and there seem to be lots of other opinions, besides.

The latest entry in the recurring nightmare of efforts to explain the 2016 election is a book titled, Chasing Hillary: Ten Years, Two Presidential Campaigns, and One Intact Glass Ceiling. This effort at explanation, by New York Times' reporter Amy Chozick, provides what Amazon calls "the real story of what happened in the 2016 election, told through the dishy, rollicking, deeply personal story of one New York Times journalist's career covering the First Woman President who wasn't."

As is so often true, I haven't read the book I am talking about, only a short summary, published in The Times and authored by Amy Chozick herself. Prominently featured in The Times' article is the following "pull quote," providing Hillary Clinton's bottom line evaluation of why she lost:

"They Were Never Going to Let Me Be President"

That pull quote headline definitely grabbed my attention. It is a great example of what makes the constant reevaluations of the 2016 election such a recurring nightmare for me. Time after time, Hillary Clinton simply refuses to "Move On," to admit that she lost the election, and that it is a lot less important to assign blame than to figure out how to go forward now.

As for this "they" who were never going to let Hillary Clinton win: what is that all about? According to former President Bill Clinton (if you credit Amy Chozick), "they" means The New York Times!

Read it, and then pray with me that the recurring nightmare of trying to find some excuse for Hillary Clinton's loss of the election will go away forever, so we can stop rehashing the past, and start figuring out what to do now, as we face an ever more horror-inducing future.