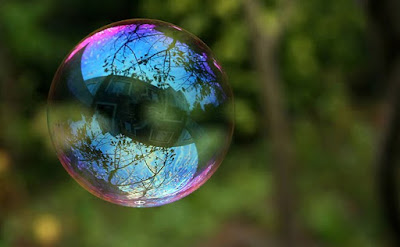 A brief article in the online magazine Aeon defines an "epistemic bubble" as "an informational network from which relevant voices have been excluded by omission." "Epistemic" is defined as "of or relating to knowledge or knowing." When we are caught inside an "epistemic bubble" we only know what is inside the bubble. Other views and contrary information are simply not available.

It may well be that our location within an epistemic bubble is wholly inadvertent. Without any specific or active effort to exclude information that might challenge the views we already have, we end up only hearing and finding out about information that is consistent with what we already think. Because we increasingly live within a "digital world," we increasingly find ourselves inside such epistemic bubbles. We only know what the Facebook algorithm tell us, and we get the news that we have programmed into our Google alerts to receive.

If we are trapped inside an epistemic bubble, we need to break out.

Where an epistemic bubble merely omits contrary views, an echo chamber brings its members to actively distrust outsiders. In their book, Echo Chamber: Rush Limbaugh and the Conservative Media Establishment, Kathleen Hall Jamieson and Frank Cappella offer a groundbreaking analysis of the phenomenon. For them, an echo chamber is something like a cult. A cult isolates its members by actively alienating them from any outside sources. Those outside are actively labelled as malignant and untrustworthy. A cult member’s trust is narrowed, aimed with laser-like focus on certain insider voices. In epistemic bubbles, other voices are not heard; in echo chambers, other voices are actively undermined.

Whether we find ourselves in an "epistemic bubble" or an "echo chamber," we need to break out.

But how to do that? The only real way, I think, is by contact with "random" human beings, and particularly human beings with whom we can form trusting relationships, after we have met them, and talked to them for a while. By "random," I mean people who do not already come prepackaged, as either supporters or opponents, as either friends or enemies. Just "people," in the raw.

When you think about it, our whole system of representative democracy is based on the idea that those to whom we have given the power to represent us will, inevitably, be continually meeting with their constituents and hearing from "the public."

The "public," all of us, is the ultimate repository of governmental power. We can't delegate everything to the politicians. That means that each one of us, like the politicians to whom we have officially delegated the work of representing us, must understand that we, too, need avidly to seek out "random" people, our peers in the public, to see what they think, and what they have to say.

We need to take very seriously what they think.

We need to think, very hard, about what they say!

That's the way we break the bubble. 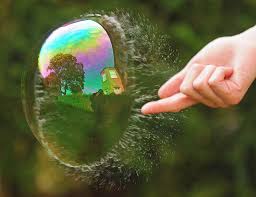