#124 / DACA Gets Some Unpredicted Support 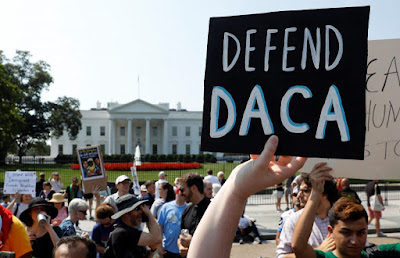 Deferred Action for Childhood Arrivals (DACA) is an American immigration policy [or program] that allows some individuals who were brought to the United States illegally as children to receive a renewable two-year period of deferred action from deportation. DACA allows such persons to become eligible for a work permit in the United States, but the DACA program does not provide a path to citizenship for recipients.

The DACA policy was announced by President Barack Obama on June 15, 2012, and the United States Citizenship and Immigration Services (USCIS) began accepting applications for the program on August 15, 2012. Of course, this idea of being "nice" to immigrants who are all living positive and productive lives, and who are only in the country "illegally" because their parents brought them here when they were little children, runs counter to the impulses of the Republican Party, and to the predilections of our anti-immigrant president.

On April 2, 2018, President Trump declared DACA "dead," and called for expedited efforts to "secure the border," and to deport those registered in the DACA program, among others. The Heritage Foundation, one of the many right-wing think tanks that pontificate against anything ever advocated by or accomplished by President Obama, cheers this inhuman attack by the president, and has also declared the DACA program unconstitutional.

Because The Wall Street Journal is usually thought of as a "conservative" newspaper, allied with the Republican Party, and because it is generally supportive of our current president, I was a bit surprised to find that The Journal may well support the DACA program.

This revelation came in a May 1, 2018, editorial titled, "Gone With the Windrush in Britain." The meaning of this rather obscure headline will only make sense to those who have been following one of the major controversies now agitating politics in Great Britain. Here is how The Journal tells the story:


Amber Rudd [a member of the Conservative Party] lost her job as U.K. Home Secretary this weekend amid a widening immigration scandal. Yet there’s every chance Britain’s political class—and voters—will let this crisis go to waste.

Ms. Rudd’s resignation is the latest fallout from the Windrush scandal. For two decades starting in the late 1940s, the U.K. accepted migrants from across the Empire (later, the Commonwealth) to rebuild after World War II. Known as the “Windrush generation” because one of the first ships to bring them was the HMT Empire Windrush, hundreds of thousands and their children worked hard, paid taxes, and assimilated into U.K. society.

A 1971 law granted these migrants permanent U.K. residence and a path to citizenship. But an unknown number either never obtained formal proof of their immigration status because they didn’t realize they needed it, or have lost the relevant paperwork. Now they’re running afoul of a 2012 law that requires employers, landlords and even hospitals to verify the immigration status of prospective tenants, employees or patients. Some face deportation.

As can be seen, Britain was, at least initially, quite a bit more welcoming to immigrants than the United States has been, since British policy provided immigrants not only with permanent residency, but also with a "path to citizenship." This is something that most Republican Members of Congress refuse to do for long-term immigrants living in the United States.

Most recently, despite past practice, Prime Minister Teresa May and the Conservative Party has explicitly promised to create a “hostile environment” for illegal immigrants, which the 2012 law mentioned by The Journal most certainly does. It seems like this sort of thing is going around!

At any rate, aggressive efforts to deport immigrants who have lived almost their entire lives in Britain, the so-called "Windrush" immigrants, and most of whom are quite elderly, has been roiling British politics. In the United States, in their opposition to DACA, our so-called "conservatives" are attempting to expel the young, not the old, but concept is just the same. "Hostility" to immigrants is the key.

Commenting on what is happening in Britain, The Wall Street Journal makes the case that our Congress needs to find a way to give DACA participants permanent residence and a path to citizenship:

Voters shocked by the Home Office’s mistreatment of the Windrush generation might ask what they thought would happen when they elected politicians committed to blunt numerical targets. A Sky Data poll last week found that 53% of voters support deportation quotas, but 54% believe the suffering of Windrush migrants is “not a price worth paying” to discourage illegal immigration. The teachable moment here is that Draconian immigration restrictions are, well, Draconian—a lesson that also applies to America’s debate over the Dreamers brought to the U.S. illegally as children.

The temptation will be to view Windrush as a scandal of bureaucratic incompetence, and there’s plenty of that on display. But the bigger scandal is that pandering politicians and indecisive voters have goaded each other into immigration policies that shock the public when they come to light.

When it is really understood what the president is proposing, and how "draconian" it truly is, I would like to hope that this proposition would "shock the public."

What can you say about a proposal to deport young people to countries about which they know little or nothing, when these young people have committed no offense, and have simply been living productive lives in the United States after having been brought here years ago by their parents?

Deport them? Isn't this "hostility" taken many steps too far? Isn't this, truly, "shocking?"

That's the president's program, and I think it's shocking. And it looks like it shocked The Wall Street Journal, too!