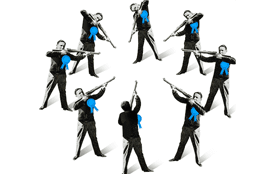 I am not a member of any organized political party. I am a Democrat.

The quotation above is attributed to Will Rogers, and since I do want to talk about the Democratic Party today, it seems appropriate.

I don't know who first came up with the rephrasing of the traditional firing squad command that I have used as a title for today's blog posting, but that rephrased command seemed appropriate for today's discussion, and very much consistent with Will Rogers' evaluation of the Democratic Party.

I am also not sure who first used the expression "a circular firing squad" to describe a rather common phenomenon. Again, the illustration above seemed appropriate for today's discussion. The online word site, Wiktionary, provides no guidance on the question of who first used the expression, but it does define the expression as follows: "Circular Firing Squad - A political party or other group experiencing considerable disarray because the members are engaging in internal disputes and mutual recrimination."

Wiktionary, please let me introduce you to my friend, Will Rogers, and to the leadership of the Democratic National Committee!

What prompts today's posting on the current state of the Democratic Party? Several things.

First, I have been outraged at recent news reports about the Democratic Congressional Campaign Committee (DNCC), which phones my home just about every evening to see how I am doing, and to demand more money.

In case you missed it, the DNCC has been attacking a progressive Democratic candidate for Congress, in Texas, because the DNCC has decided that she is too "progressive" to win a November runoff. Having formulated this judgment, which may or may not be correct, the DNCC has now essentially started campaigning against her, and has released information that is designed to discourage democratic voters from selecting her in the primary, and that will be used against her by her Republican Party opponent in the general election, if she wins the nomination. As a former delegate for Bernie Sanders, at the 2016 Democratic National Convention, I have been through that movie before!

Second, a Democratic member of the State Legislature recently told me how distressed he is, and how upset the Democratic Party leadership in California is, at the disarray evident in various Congressional elections now underway. A number of Republican Congress Members from California have "retired," and there is a real opportunity to convert "Red" seats to "Blue" seats this November. However, the Democrats have so many different candidates in some of these races, who defy efforts to coordinate and work together, that it seems possible that the Republican Party will be able to replace the retiring Republicans with a new set.

Finally, and this is what really prompts this posting, a New York Times' Op-Ed, published on April 18, 2018, asks the question, "Where's the Tea Party of the Left?"

That, actually, is my question, too. As a Sanders' delegate, I saw firsthand how Democratic Party officials used what is supposed to be a "neutral" Party apparatus during the primaries to make it impossible for Bernie Sanders to win the nomination. I wrote a number of times about that experience in this blog. My experience convinced me that the Democratic Party has been captured by the same corporate interests that control the Republican Party, and that major changes were in order, so that our democratic political system could begin functioning again.

Matt Grossman and David A. Hopkins, who authored The Times' Op-Ed, have a distinctly different perspective. They believe that the Democrats are doing great! The Democrats, they believe, have managed to damp down the kind of ideological warfare that the Tea Party Republicans have engaged in, and that's all to the good. This is not my analysis.

A "pull quote" in the hard copy edition of the Op-Ed in The Times, says, "Democrats tend to avoid ideological battles." If that is true, and I question that, the end result may be success for the Democratic Party in November 2018 (and taking back Congress would be really good), but what is ultimately necessary is that we begin making fundamental changes in virtually every aspect of our social, political, and economic life.

Until there is a "program" to do that, and a "party" that makes such fundamental change its platform and mission, we are only rearranging the deck chairs on the Titanic (to use another great expression, as least as good as that one about the circular firing squad). 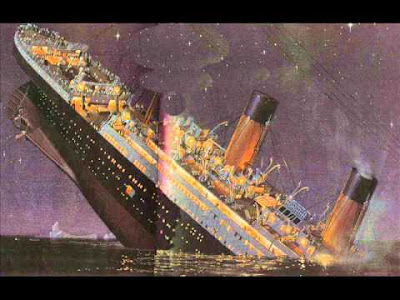