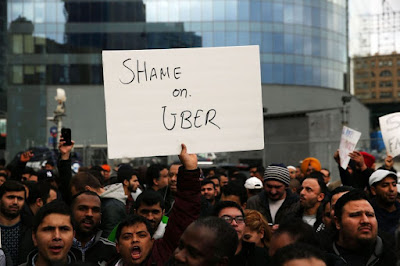 The Massachusetts Institute of Technology published a study showing that Uber drivers only earn $3.37 per hour, when the drivers' actual expenses are taken into account. As might be expected, the study was immediately challenged by Uber and other ride-hailing services, and on March 6, 2018, the lead researcher, associated with The Center for Automotive Research, admitted that the study was flawed.

In fact, says Stephen Zoepf, drivers actually make $8.55 per hour. Whew! I'm glad we got that cleared up.

From the beginning, I have been highly skeptical of the so-called "gig economy." The MIT study, whichever dollar per hour figure turns out to be most correct, indicates the problem. In the ride-hailing branch of the gig economy, massive corporations are ripping off working men and women. That is not a good sign for the long-term prosperity of the workers, or for the health of our economy, though it may be good news for unicorn-hunting investment firms and their corporate cohorts.

In its coverage of the story, the San Francisco Chronicle had this to say:

Driver earnings have long been difficult to calculate because of the piecemeal nature of working for the services. A few years ago, Uber advertised that drivers could make $90,000 a year in New York and $74,000 in San Francisco, a claim that was swiftly refuted. Uber paid $20 million to settle a Federal Trade Commission lawsuit that claimed its statements about earnings and a vehicle financing program were false and misleading.

The brouhaha underscores how vital drivers are to both services. Driver turnover is high — the study said it ranged from 50 to 90 percent, a statement that neither company disputed — so Uber and Lyft must constantly attract new streams of recruits to keep cars in service.

If you are a fan of the Golden State Warriors, and watch their games on NBC Sports Bay Area, you will have seen a lot of very compelling Uber advertisements aimed at driver recruitment. Click the link below for an earlier version. It seems to me that the undisputed turnover figures, cited above, make clear that the rosy picture painted by Uber, Lyft, and similar companies, is highly misleading. If driving for Uber is such a great job, it is unlikely that up to 90% of the people who take that job would subsequently decide to quit. Benefits to the drivers (the workers) are vastly less than the benefits that the corporations gain from their work.

My concern about the benefits of the "gig" economy continue, and Chris Hedges is publicizing the same message. If, by any chance, you are thinking of driving for Uber, or otherwise "going gig," the following definition, which I cited in my 2015 blog posting, continues to be pertinent: