#116 / A Local Newspaper Against Local Control 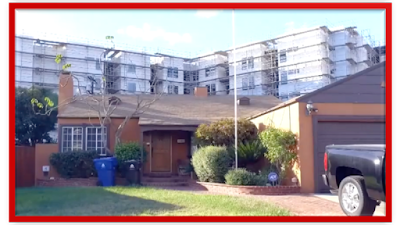 The picture shows what might happen in Santa Cruz, California if a bill like SB 827 ever became law. This is the bill that would have stripped local communities of their ability to control building heights on any residential property within one-half mile of a transit center, or within one-quarter mile of a transit line that has peak hour service every fifteen minutes. As originally introduced, the bill would have granted developers the right to build to no less than eight-five (85) feet.

One might think that a local community newspaper would be on the side of the local community, and in favor of preserving local control over important land use decisions. One might think that efforts by the state government to take that local control away would be denounced and opposed by the local press, since such land use decisions can profoundly affect our residential neighborhoods.

Not in Santa Cruz!

On Sunday, April 22, 2018, the Santa Cruz Sentinel published an editorial bemoaning the fact that SB 827 had been defeated. Click the link to read what the Sentinel said.

One might also think that a locally elected City Council would have been zealous to protect its ability to make land use decisions on behalf of the local community, and would have resisted an effort at the state level to take such land use authority away.

Not in Santa Cruz!

When SB 827 was brought before the City Council at the request of Mayor David Terrazas, with a request from the Mayor that the Council oppose SB 827, the Council decided to "study" the bill before taking a position.