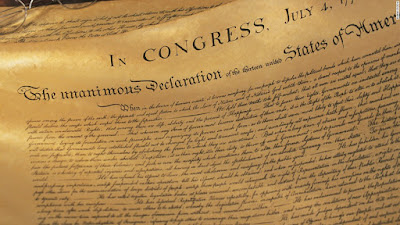 Because of their decent respect for world opinion, the American colonies, when they declared their independence from Britain, in 1776, outlined a set of complaints against King George, III of Great Britain. That listing of complaints, part of the Declaration of Independence, included the following:

He has endeavoured to prevent the population of these States; for that purpose obstructing the Laws for Naturalization of Foreigners; refusing to pass others to encourage their migrations hither, and raising the conditions of new Appropriations of Lands.

Today, April 25, 2018, the United States Supreme Court will hear oral arguments in the case of Trump v. Hawaii, a case brought by the president in an effort to salvage the most recent edition of the "Muslim ban" that the president has sought to establish almost from his first day in the White House.

In an exceptionally well-stated opinion piece in The New York Times, appearing yesterday, Thomas H. Kean, John Danforth, and Carter Phillips make note of what the Declaration of Independence had to say about immigration issues, noting that because the King had abused his powers in the area of immigration, the Framers wanted that topic to be controlled by the Congress, not the President.

The issue, in Trump v. Hawaii, is whether or not the Supreme Court will allow the president to violate one of the key principles of our Constitutional system, the principle that requires a "separation of powers." This is a principle that is intended to prevent the onset of autocracy and unilateral executive action:

The separation of powers is not about the wisdom or popularity of any president or policy but speaks to the very foundations of our republic. As Alexander Hamilton warned in the first Federalist Paper: “Of those men who have overturned the liberties of republics, the greatest number have begun their career by paying obsequious court to the people; commencing demagogues, and ending tyrants.” ...

Mr. Trump has every right to propose that Congress change the law. After 15 months in office, he has had ample time to try to persuade Congress to adopt his travel ban. Yet he has not proposed to Congress anything like that ban. The Supreme Court should embrace the coequal footing our founders gave it, restore the separation of powers and end the president’s unilateral nationality ban.

Supposedly, a number of the "conservative" Justices on the Court are "originalists." Let's hope they remember what the Framers of our Constitution did about curtailing the unilateral exercise of presidential power in the area of immigration (and in other areas, too).