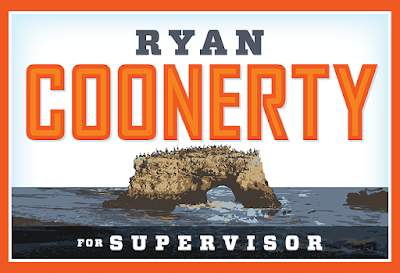 The Santa Cruz Sentinel has endorsed Ryan Coonerty for Third District Supervisor in Santa Cruz County. So have I.

If you are a voter in the County's Third Supervisorial District (including most of the City of Santa Cruz, Bonny Doon, Davenport and the North Coast), I am hoping you will join me in voting to reelect Ryan Coonerty in June.

As it turns out, I have been seeing a lot of Ryan, lately, as we are both working hard to achieve a huge turnout in favor of Measure U, which will be on the June ballot in the City of Santa Cruz.

Measure U was unanimously placed on the ballot by members of the Santa Cruz City Council. It asks City voters to express their opposition to the addition of 10,000 new students to the UC Santa Cruz Campus. That doesn't include faculty and staff. This proposal, coming at a time when housing, traffic, and water security issues are raising daunting challenges for local government, makes this University proposal nothing less than a direct assault on the character and security of our local community.

Ryan has been an enthusiastic supporter of Measure U, and I anticipate that he will continue to work to stop the University's plan to pursue unsustainable growth at UCSC after the passage of Measure U in June. The University's growth decisions are not under the direct control of our city and county governments, but local government leadership can make a huge difference.

The Sentinel's editorial highlighted Ryan's work on this key issue, as it made its endorsement:

Coonerty was instrumental a decade ago as a Santa Cruz city councilman in forging an historic agreement with UCSC that led to more housing on campus, settled some traffic concerns and promoted on-campus water conservation. But the effort by UC regents to boost enrollment from the present cap of 19,500 to as many as 28,000 by 2040 led him to work with present council members on a June advisory ballot measure that will urge UCSC leaders and state lawmakers to limit student enrollment at the Santa Cruz campus.

As you can guess, I was delighted at the Sentinel's editorial. The paper never endorsed me, not even once, in the five times I ran for the seat that Ryan now holds.

I am not sure why, but I did get mentioned in the Sentinel editorial, too, heading up a list of the Supervisors who served before Ryan:

For years, the seat was held by Gary Patton, whose land-use policy making still defines much of how Santa Cruz County has grown, and protected open spaces. Patton was succeeded by Mardi Wormhoudt, who also wielded significant influence, inside and outside city limits. Neal Coonerty followed Wormhoudt, and today, the incumbent, seeking a second term, is Neal Coonerty’s son, Ryan Coonerty.

An elected representative is supposed to "represent" the people who have elected that official. I get a lot of either blame or credit for the land-use policy making that took place during the time I was on the Board, but what is most important to me is not the specific policies that were adopted, but that our local government, during the time I was involved, did what the majority of the community wanted. In other words, self-government worked!

That's success, in my mind, and making that happen should always be the objective of every local official. Check out Rule #3 in my list of the five simple things every elected official should do.

After Measure U passes, if the public says what I think it is going to say about the plan to add 10,000 students to our already over-stressed community, our local officials will need to mobilize our local government, and all of its resources, in order to achieve for the people what the people want!