#108 / Hayden White And The Winds Of Freedom 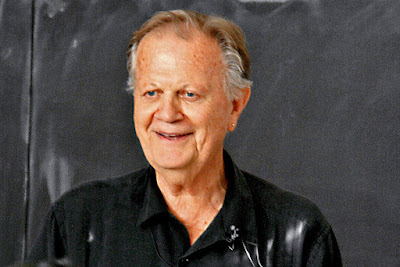 Hayden White, pictured, taught in the History of Consciousness program at the University of California, Santa Cruz. He was "an influential scholar whose ideas on history ... have fueled discussions in academic circles for half a century." White died on Monday, March 5, 2018,  at his home in Santa Cruz. He was 89.

The Santa Cruz Sentinel ran a nice obituary. So did The New York Times, a little bit of which I have quoted above.

White's colleague, Jim Clifford, who is now leading a fight to save the East Meadow on the UCSC campus (the administration's proposed location for a rather undistinguished housing complex), gave a lovely tribute to White at a March 9, 2018, memorial gathering at Temple Beth El.

Bruce Robbins, a professor at Harvard University, honored White in an article that Robbins called, "Emancipation from the Burden of History." It is an excellent explanation of the way that White viewed history, and the work that historians do.

I never knew White personally, and so am hardly in a position to add to the encomiums that his death has so properly called forth. Let me highlight, however, one of White's political achievements that is probably not as well known, or as well remembered, as his academic work. I am referring to White's successful lawsuit defending academic freedom and the privacy rights of both students and professors.

During a period in which he was a professor of history at the University of California, Los Angeles, White brought a lawsuit against Los Angeles Police Chief Ed Davis. Davis had directed various Los Angeles police officers to "pose as students," and to enroll at UCLA, and then to "engage in the covert practice of recording class discussions, compiling police dossiers and filing 'intelligence' reports so that the police [would] have 'records' on the professors and students."

White sued Davis to stop this kind of surveillance, and the trial court dismissed White's lawsuit. But White didn't give up, and on March 24, 1975, the California Supreme Court unanimously reversed the dismissal of White's lawsuit in a decision that defended academic freedom on the basis of the protections provided by both the First and the Fourth Amendments to the United States Constitution, and through the "self-executing" right of privacy guaranteed in the California Constitution.

The case is called White v. Davis, and it is worth reading. Click the link, if you'd like to do that.

Since I teach a course at UCSC called, "Privacy, Technology, And Freedom," I am going to make sure that my students read White v. Davis, and find out about what Hayden White accomplished.

As the court said in its conclusion: "The extensive, routine, covert police surveillance of university classes and organization meetings alleged by the instant complaint are unprecedented in our nation's history." In defending academic freedom against the chilling impact of government surveillance, the court cited to the motto of my own school, Stanford University. That motto, "Die Luft der Freiheit weht," translates from the German as, "The wind of freedom blows."