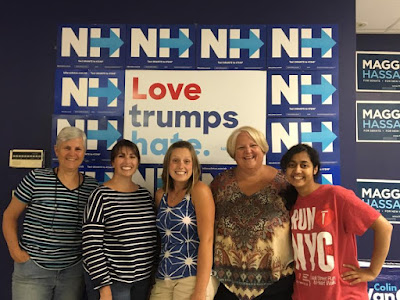 In 2016, Annafi Wahed was on the campaign staff of presidential candidate Hillary Clinton. She is on the right, in the picture above, which comes from Wahed's Twitter feed.

Most recently, Wahed attended a meeting of the Conservative Political Action Conference, or CPAC, sponsored by the American Conservative Union, which bills itself as "the nation's original conservative organization." Wahed wrote about this visit in an opinion piece in the March 2, 2018, edition of The Wall Street Journal, "A Hillary Staffer Goes To CPAC." That link might not work for non-Wall Street Journal subscribers, so here's the flavor of what Wahed had to say:

Among liberals, conservatives have a reputation for being closed-minded, even deplorable [comment: that is definitely a Hillary Clinton word]. But in the Washington Republicans I encountered at CPAC, I found a group of people who acknowledged their party’s shortcomings, genuinely wondered why I left my corporate job to join Mrs. Clinton’s campaign in 2016, and listened to my arguments before defending their own positions.

Although CPAC attendees were as passionate about policy as my liberal friends, they took a more lighthearted approach. At one after-party, they alternated between taking selfies with Milo Yiannopoulos and engaging in a thoughtful, substantive discussion with a Democrat. One notable exchange: I exclaimed, “Of course the Department of Education is necessary!” which drew the rejoinder, “Great! Let’s make 50 of them!”

As I look back on all the people who greeted me warmly, made sure I didn’t get lost in the crowd, and went out of their way to introduce me to their friends, I can’t help but wonder how a Trump supporter would have fared at a Democratic rally. Would someone wearing a MAGA hat be greeted with smiles or suspicion, be listened to or shouted down?

At Hillary rallies, we always filled the stands with our biggest supporters. At CPAC, most of the few liberals in attendance had media credentials, as I did. I’m new to this, but shouldn’t we want to engage with people who aren’t convinced of our viewpoints? Why aren’t there more conservatives at Democratic rallies and more liberals at CPAC? What are we afraid of?

Hopefully, those on the "liberal" or "progressive" side of the political spectrum are not "afraid" of debating and discussing issues with those who have "conservative" views, although I do think it is likely that a person with a MAGA hat, worn without satire, would not have gotten a particularly friendly reception at the recent convention of the California Democratic Party. In all fairness, however, Wahed did not, as far as I can tell, go to this CPAC gathering sporting any gear that would have identified her as a "liberal" or as a "progressive." I doubt she had her "Forward Together" button on her blouse. Wahed was there with press credentials, and her enthusiastic and welcoming reception did not come in the face of dress and demeanor that made her political preferences immediately clear.

Here's a thought, though, that Wahed's article provoked. If the Democratic Party wants to prevail in the upcoming midterm elections, or in any elections, I think that the Democrats will have to advance a "propositional" program and platform, and not one that is essentially "oppositional" in nature.

In other words, Democrats need to be "for" something, not just against our current President, "deplorable" as our current president may be. Others agree with me. Sonali Kolhatkar, for instance, suggests the same thing in her recent article in Truthdig:

There are several signs that strong progressive candidates with grass-roots backing are refusing to take a chance that revulsion toward Trump will be enough to propel Democrats to congressional power and have challenged Democratic incumbents from the left.

So far, despite those "several signs" spotted by Kolhatkar, I'm not seeing much of that "propositional" approach. The ordinary voters of the world aren't going to write off the "conservatives" just because the "liberals" say they're "bad."

"Conservatives" are people, too, and if we want to have a chance, our "liberal" program and platform had better be based on something positive, that appeals generally to the voters at large.