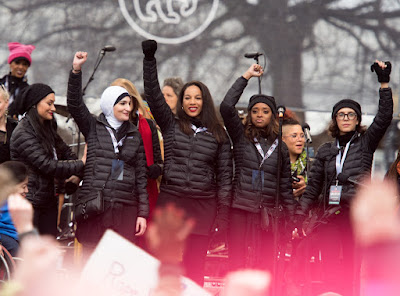 In January 2017, as The Atlantic notes, the Women’s March "punctuated Trump’s inauguration with what was likely the largest single-day mass demonstration in American history." There is now a debate about whether the Women's March has been compromised by the alleged anti-antisemitism of one of its leaders, Tamika D. Mallory. Mallory, who is black, and who has been attending Nation of Islam events since she was a child, has refused to denounce Louis Farrakhan, who is the leader of the Nation of Islam.

As The Atlantic puts it, "The Women's March Has a Farrakhan Problem." Masha Gessen, writing for The New Yorker, agrees:

[Mallory] wrote that she had been attending Nation of Islam events since she was a child, and would continue to do so. She bristled at the suggestion that she was not fully committed to fighting anti-Semitism and homophobia. She certainly did not apologize. “The Women’s March, throughout this whole controversy, just hasn’t come across as taking anti-Semitism very seriously,” Jesse Singal wrote at New York. “Mallory’s unwillingness to see Farrakhan for what he is will surely cost the entire Women’s March organization its credibility among many Jewish people, LGBTQ people, and those who see themselves as allies to those communities,” Christina Cauterucci predicted at Slate. It seemed reasonable to take the position that as long as any of the leaders of the Women’s March was associated with a vicious bigot like Farrakhan, the entire organization was delegitimized. This is also an oddly satisfying position.

I found out about this debate by way of the weekly blog published by The Hannah Arendt Center at Bard College. The blog is titled "Amor Mundi," and usually spotlights articles that mention Arendt, as Gessen's does.

The Director of the Hannah Arendt Center, Roger Berkowitz, disagrees with what Gessen says about the debate, making the point that Arendt expects politics to be full of debate and discussion, conflict and controversy, and that efforts to eliminate such controversies, however well-motivated, represents an attack on politics itself:


Many on the left see Mallory's support as de-legitimating the Women's March. Masha Gessen turns to Hannah Arendt to try to understand the way "oddly satisfying position" of those who would condemn The Women's March for its association with someone who associates with anti-semites. The danger of such satisfaction is, as Gessen argues, the loss of politics. And yet, even as Gessen fears the loss of politics, she embraces the feeling of helplessness of the age and argues that we live in a time when no politics is possible.

Such fatalism, however, abandons the argument for human freedom as well as the faith in politics and revolution that are at the center of Arendt's thinking. That is the reason why Gessen, who spoke at the last Arendt Center Conference, felt justified in criticizing the decision to include a member of the German nationalist Alternativ für Deutschland; and it is why she suggests that President Trump and his supporters are apolitical and not worth arguing against. While it is important to make judgments and to argue against those who target refugees and make war on facts, to assert that law abiding adversaries are beyond the boundaries of political discourse is to give in the dangers of self-satisfied certainty that Arendt understood to be one of the greatest political dangers.

I agree with Berkowitz. In addition, I came across a Facebook posting on the day before I heard about this debate, and the video I have linked below speaks directly to the debate about whether the Women's March is anti-Semitic, at least to my mind.

The video is short, and lots of fun. It's called, "Why the rich keep us separated."

See what you think. I think George Carlin "nailed it."