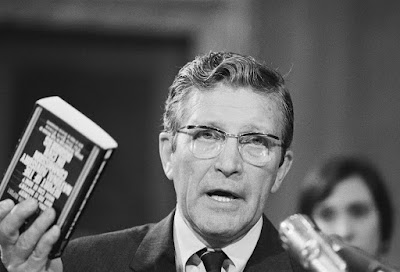 The picture is of former Illinois Governor Otto Kerner, Jr. Kerner's political and public service career (which included service on the United States Court of Appeals for the Seventh Circuit) was marred, at the end, by his conviction on seventeen counts of mail fraud, conspiracy, perjury, and other charges. The charges were related to Kerner's tenure as Governor, and some thought them unfair. Nonetheless, the convictions were never overturned, perhaps partly because Kerner died, after having resigned his judicial position and having served time in federal prison.

Recently, former Oklahoma Senator Fred Harris and Alan Curtis, the president and chief executive of the Eisenhower Foundation, wrote a powerful Opinion Editorial about Kerner's main claim to fame, the report issued on February 29, 1968 by the National Advisory Commission on Civil Disorder, which was better known as the "Kerner Commission."

The Commission was established by President Lyndon B. Johnson in Executive Order 11365, to investigate the causes of the 1967 race riots in the United States and to provide recommendations for the future. The Kerner Commission's report, which I remember reading in a paperback edition, just like the one shown in the picture, above, concluded that:

“Our nation is moving toward two societies, one black, one white – separate and unequal.” 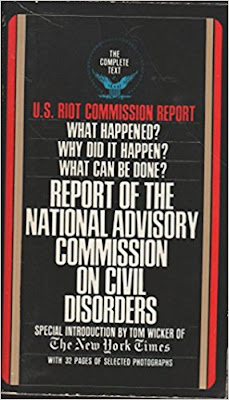 The Harris-Curtis Op-Ed, published on February 28, 2018, exactly fifty years after release of the Kerner Commission report, is titled, "The Unmet Promise of Equality." It is disturbing reading. Harris and Curtis conclude that:

Harris and Curtis argue that we know what to do. The chart below, which can be seen full size by clicking this link, outlines what is needed.

Knowing what to do is one thing. But the Kerner Commission told us what to do over fifty years ago. To eliminate the outrage of segregation, mass incarceration, and the scourge of extreme income inequality, we actually  have to do it! 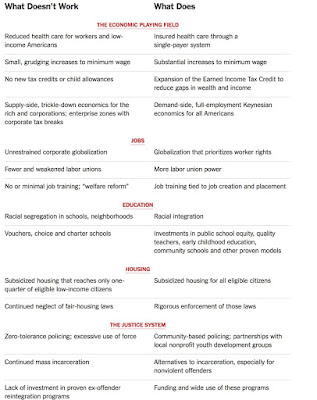