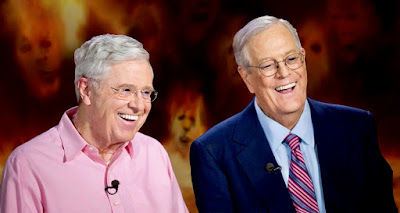 The Koch bothers, Charles and David (pictured), are each worth more than $40 billion, and to say that they are "active politically" would be a massive understatement. According to Rolling Stone, Koch-affiliated organizations raised some $400 million during the 2012 election, and they haven't slowed down since. All these contributions are having a significant impact on public policy, too, as a recent article from The Intercept makes clear.

Koch Industries is a private company, and thus the Koch Brothers don't have to make any public accounting of how they earn that money. According to the article I am referencing, dated in September 2014, "the Koch brothers are in the oil business...but Koch Industries is not a major oil producer. Instead, the company has woven itself into every nook of the vast industrial web that transforms raw fossil fuels into usable goods. Koch-owned businesses trade, transport, refine and process fossil fuels, moving them across the world and up the value chain until they become things we forgot began with hydrocarbons: fertilizers, Lycra, the innards of our smartphones."

I was struck by a headline on a more recent article, published by Jim Hightower's Lowdown. Here's what the headline said:

In fact, that somewhat antiquated-sounding phrase, "the Common Good," expresses the central and enduring question in our national politics. Are we nothing more than a collection of individuals (which is pretty much the premise upon which the Koch Brothers seem to operate). Or, to the contrary, are we "in this together?"

If it's the latter, as our greatest leaders have always proclaimed, then a war against the "Common Good" is a war against what is best in both our history and our potential future. Whether we talk about health care, education, or land use - whatever issue we address - if our society elevates individual prerogative over collective community benefit, then we are heading for disaster. And that's where the Kochs and their politics would apparently like to send us.

Ben Franklin got it right, right from the start:


We must all hang together, or assuredly we shall all hang separately.

Robert Reich, like Jim Hightower, has also raised concerns that selfishness is prevailing, and that Americans may be losing their commitment to the Common Good. Unfortunately, dedication to the Common Good is all too uncommon. What you have to do, if you care about the Common Good, is to pay attention to your neighbor, and to what your neighbor needs. To do that, you need to take your eye off your own money, every little once in a while.