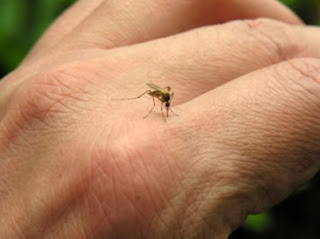 Tom Engelhardt is an American writer and editor. He writes a blog called TomDispatch, which is associated with The Nation Institute. Englehardt is also one of the co-founders of the American Empire Project and is the author of the 1998 book, The End of Victory Culture: Cold War America and the Disillusioning of a Generation.

I regularly get notices about Englehardt's latest blog postings, which he calls "Tomgrams." For some reason, the latest notice I got was about a posting from 2016, in which Englehardt commented on then-candidate Donald J. Trump. I thought his headline was pretty good:

Donald Trump Is the Mosquito, Not the Zika Virus


As Englehardt's 2016 posting reminds us, there was, during all the months leading up to the 2016 election, "much discussion of Donald Trump’s potential for 'authoritarianism' (or incipient 'fascism,' or worse)." Englehardt further observes that this authoritarian threat was "generally treated as if it were some tendency or property unique to the man who rode a Trump Tower escalator into the presidential race to Neil Young’s “Rockin’ in the Free World.”

Since Mr. Trump's election, I would say that concern about his authoritarian tendencies has not abated, but in fact increased.

Englehardt's point, though, is that Trump is merely spreading a disease that has existed in our body politic for some time. He's not the actual problem. He's just spreading the problem around.

Mosquitoes are usually more of an annoyance than a danger to life itself. But if the mosquitoes are carrying around a deadly virus, that's a different story. I agree with Tom Englehardt that the virus that is being spread around by our current president is definitely dangerous, and is democracy-threatening, and that it has been infecting our national life for a long time:

Few bother to consider the ways in which the foundations of authoritarianism have already been laid in this society -- and not by disaffected working class white men either. Few bother to consider what it means to have a national security state and a massive military machine deeply embedded in our ruling city and our American world. Few think about the (count 'em!) 17 significant intelligence agencies that eat close to $70 billion annually or the trillion dollars or more a year that disappears into our national security world, or what it means for that state within a state, that shadow government, to become ever more powerful and autonomous in the name of American “safety,” especially from “terrorism” (though terrorism represents the most microscopic of dangers for most Americans).

In this long election season, amid all the charges leveled at Donald Trump, where have you seen serious discussion of what it means for the Pentagon’s spy drones to be flying missions over the “homeland” or for “intelligence” agencies to be wielding the kind of blanket surveillance of everyone’s communications -- from foreign leaders to peasants in Afghanistan to American citizens -- that, technologically speaking, put the totalitarian regimes of the previous century to shame? Is there nothing of the authoritarian lurking in all this? Could that urge really be the property of The Donald and his followers alone?

An engaging article in the February 26, 2018, edition of The New Yorker, which I read the same day I saw the 2016 "Tomgram," discusses the work of German philosopher and cultural theorist Peter Sloterdijk, who comes at an analysis of President Trump from a completely different angle, but arrives at pretty much the same conclusion as Englehardt:


"Trump is a degenerate sheriff.... What makes Trump dangerous is that he exposes parts of liberal democracies that were only shadowily visible up until now. In democracies, there is always an oligarchic element, but Trump makes it extremely, comically visible." For Sloterdijk, Trump’s true significance lies in the way that he instinctively subverts the norms of modern governance. “He’s an innovator when it comes to fear,” Sloterdijk told me. “Instead of waiting for the crisis to impose his decree, his decrees get him the emergencies he needs. The playground for madness is vast.”

I carry no brief for the extremely annoying mosquito who now serves as our president. By all means, let's swat him away at the earliest opportunity. Let's not be deceived, however, that our problem is Donald Trump. If we are worried about authoritarianism, as we ought to be, if we are concerned that the future of our democracy is in peril, we need to drive the disease of imperialistic militarism right out of our body politic.