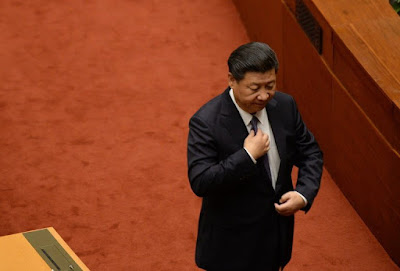 Pictured is Xi Jinping, the President of the People's Republic of China. Perhaps more importantly, Xi is also the General Secretary of the Communist Party of China. That may be the more consequential position, given the subservience of the government to the party. Basically, though, Xi is the head of all major institutions of power in China, which include the party, the state, and the military. This has been recognized by his designation as China's "core leader."

Recently, at Xi's request, the party has changed the rules about term limits for the presidency. Since Xi is just entering his second five-year term as President, this potentially gives him life tenure as the nation's leader, and certainly attenuates the idea that Xi will have to accommodate any views other than his own, going forward.

The New York Times' "Interpreter Newsletter," written by Max Fisher and Amanda Taub, discussed whether it was proper to call Xi a "strongman," a title that some commentators are now using to describe Xi. The picture above is from "The Interpreter," and the caption under the picture says, I assume with tongue in cheek, "Xi Jinping will need some flashier clothes before he can call himself a real strongman." The idea that "clothes make the man" goes back a long way, and I commend Sartor Resartus to you, if you haven't read that classic work by Thomas Carlyle.

I don't think, though, that Xi's clothes should be the focus of our reflections about the recent changes that Xi has accomplished in the government of China. I don't think debating whether the term "strongman" fits is of much importance, either.

As a practical matter, what counts is that the government of China has now been transformed from a model of what The New York Times' editorial board has called "an autocratic collective" to a government based on "one-man rule."

I teach a course called "Introduction to Legal Process" at the University of California, Santa Cruz, and the last chapter in the textbook I use, Law, Justice, and Society: A Sociolegal Introduction, points out that legal systems can be categorized into four major "traditions." The tradition called "socialist law," of which modern China is cited as an example in the book, largely discards what that tradition thinks of as the "archaic" concepts of individual rights and procedural limitations on state power [Page 400].

The "Common Law" tradition, on which our legal system is based, elevates dissent and difference, and is essentially "adversarial." The idea is that better, and more acceptable decisions will be forthcoming when there must be an official "debate" about what policies to pursue. The danger of "one-person" governments is that the "one person" in charge may not always make the right decision, and without any requirement that his or her decision about what action to take be tested against other ideas, even the smartest, best (and best-dressed) decision maker may make an error.

I think the editors of The Times are right, and that China has just set itself up for a potentially dangerous governmental failure:

The system Mr. Xi has created ... makes it less likely he will receive sound policy advice or be challenged on decisions in ways that could avoid mistakes. That’s because he solidified his power base during the first term by waging an aggressive campaign against corruption and dissent, silencing political rivals and stacking the ruling Politburo with loyalists reluctant to speak up ....

One has to wonder what such control will do to innovation, a driver of progress in successful economies. Or whether knowing he has a job for life, Mr. Xi — who has presented himself as a benign father figure overseeing China’s peaceful rise — may be tempted by other risks, including in foreign policy.

We have someone as our president who tends to like the "strongman" model, and just yesterday he suggested that he'd like a shot at being president for life! Let's hope that our Congress and the Courts will stick with our tradition of an adversarial politics.

Decisions based on a process that encourages conflict and controversy can avoid mistakes in the first place, and will best let a government reverse mistakes when made. As everyone knows, the human tendency to "double down" on a mistake (so as not to have admit you made one) is an all too common human tendency! Our system of law and government, based on the "adversarial" principle (and unlike the one now established in China), is designed to minimize that danger.