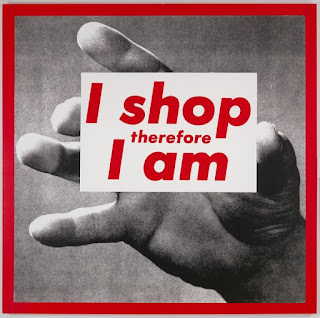 The image above, cadged from an article in the Sunday, February 10-11, 2018, edition of The Wall Street Journal, made me think. The article was titled, "A Decade of Hype and Tragedy." It focused on art in the 1980s, when "artists like Jeff Koons and Barbara Kruger [not to mention Andy Warhol] seized upon household appliances and commercial slogans as well as glamorous snippets from music and fashion" as a way to make "scathing and sly commentaries on the decade."

If we take language seriously, as the named artists took seriously the implications of our ever more commercial culture, we must acknowledge that we have largely been transmogrified from "citizens" into "consumers."

The image at the top of this posting, from Barbara Kruger, pretty much lays out the argument. More and more, we define the meaning and purpose of our existence by the things we buy and possess.

The article in The Wall Street Journal made me think, and here is what I thought:

"Consumption" is a disease*


It's a disease in more ways than one. That's what I thought!

___________________________________________________
*Tuberculosis was popularly known as consumption for a long time. Tuberculosis (TB) is a potentially fatal contagious disease that can affect almost any part of the body but is mainly an infection of the lungs. It is caused by a bacterial microorganism, the tubercle bacillus or Mycobacterium tuberculosis. Although TB can be treated, cured, and can be prevented if persons at risk take certain drugs, scientists have never come close to wiping it out. Few diseases have caused so much distressing illness for centuries and claimed so many lives.