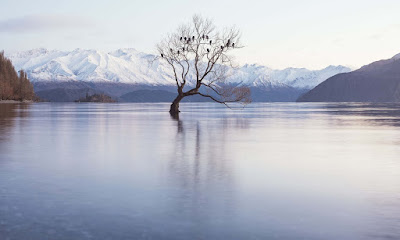 Pictured is a lake in New Zealand, owned by Peter Thiel, the billionaire Silicon Valley entrepreneur who is a strong supporter of President Trump. Thiel has recently decided to leave the Silicon Valley for Los Angeles, because of the "one-sided" (i.e., liberal) politics of the greater Bay Area.

In the longer term, Thiel is planning to abandon L.A., too, and to fly to New Zealand with a few close (billionaire) friends, and to inhabit the property pictured above. This departure for New Zealand will come as Thiel seeks to avoid the collapse of human civilization, which he is apparently thinking may come any minute.

Given Thiel's friendship with our current president, we can only hope that he isn't privy to some nuclear-enabled plan for the end, like a possible "bloody nose military strike" on North Korea, which some think our president is contemplating. Not many of us are going to be able to flee fast and far enough from whatever catastrophic consequences may come from actions taken by our impulsive Chief Executive. Thiel, always impressed by his own extraordinary abilities, is trying to get a jump on everyone else. He figures that he will get out alive.

All this is detailed in a fascinating story by Mark O'Connell, writing for The Guardian. The story is titled, "Why Silicon Valley billionaires are prepping for the apocalypse in New Zealand." According to O'Connell, the idea is based on an obscure and out-of-print book called The Sovereign Individual. Click the link to buy it on Amazon for $151.56. 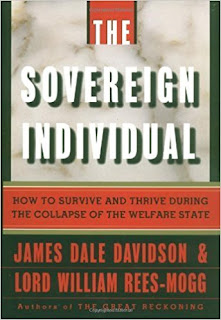 Here is how the authors of The Sovereign Individual see things happening, as explained by Mark O'Connell:

The book’s 400-odd pages of near-hysterical orotundity can roughly be broken down into the following sequence of propositions:

(1) The democratic nation-state basically operates like a criminal cartel, forcing honest citizens to surrender large portions of their wealth to pay for stuff like roads and hospitals and schools.

(2) The rise of the internet, and the advent of cryptocurrencies, will make it impossible for governments to intervene in private transactions and to tax incomes, thereby liberating individuals from the political protection racket of democracy.

(3) The state will consequently become obsolete as a political entity.

(4) Out of this wreckage will emerge a new global dispensation, in which a “cognitive elite” will rise to power and influence, as a class of sovereign individuals “commanding vastly greater resources” who will no longer be subject to the power of nation-states and will redesign governments to suit their ends.

The Sovereign Individual is, in the most literal of senses, an apocalyptic text. Davidson and Rees-Mogg present an explicitly millenarian vision of the near future: the collapse of old orders, the rising of a new world. Liberal democracies will die out, and be replaced by loose confederations of corporate city-states. Western civilisation in its current form, they insist, will end with the millennium. “The new Sovereign Individual,” they write, “will operate like the gods of myth in the same physical environment as the ordinary, subject citizen, but in a separate realm politically.”

It’s impossible to overstate the darkness and extremity of the book’s predictions of capitalism’s future; to read it is to be continually reminded that the dystopia of your darkest insomniac imaginings is almost always someone else’s dream of a new utopian dawn. Davidson and Rees-Mogg identified New Zealand as an ideal location for this new class of sovereign individuals, as a “domicile of choice for wealth creation in the Information Age.”


The person who sent me the article from The Guardian said that Thiel and his billionaire cohorts were "intoxicated by their own self-importance." That sounds about right, but however the intoxication came on, it should be clear to everyone that these guys aren't thinking clearly.  Even the billionaires are going to be affected by the end of human civilization, which is what Thiel and his buddies are "prepping" for.

Sorry guys, it's like The Three Musketeers. It is "one for all, and all for one!"

That's the real rule of human life. We are all in this together. The truly smart people know it. The sovereign (solitary) individual is going nowhere, fast!