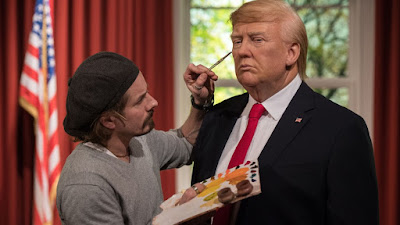 This blog posting is not actually about Donald J. Trump (pictured in waxen glory, above). Instead, I am writing to comment on a column by Amy Wax, a Professor of Law at the University of Pennsylvania Law School.

Wax has apparently run into some significant problems at her law school because of an article she wrote for the Philadelphia Inquirer on August 9, 2017. That article was titled, "Paying the Price for the Breakdown of the Country's Bourgeois Culture." Wax and her co-author, Larry Alexander, who is a professor of law at the University of San Diego Law School, indicated in their article that they saw lots of advantages to such "bourgeois culture," and that opinion didn't sit well with lots of students and faculty, at both their institutions.

To get a taste for the reaction that the Wax-Alexander commentary aroused, you can read an article from a September 2017 edition of Above The Law, which seems to be a kind of online legal gossip site, billing itself as a website providing "news and insights about the profession’s most colorful personalities and powerful institutions, as well as original commentary on breaking legal developments." Here is what Above The Law had to say:

A lot of people made up their minds about Professor Amy Wax of Penn Law and Professor Larry Alexander of USD Law long before they published their now-infamous editorial “Paying the price for breakdown of the country’s bourgeois culture,” an unapologetic paean to segregationist era America. But there are still those who haven’t drawn a line in the sand. People who might privately disdain the substance of the argument but can still envision some buzzword-worthy defense of the professors, be it “academic freedom” or “free speech,” or feel swayed by a deeply held belief that “this isn’t my problem” or a sense of “bothsides-ism” over out-of-control social justice warriors.

If you fall into this camp, take a moment to consider that you’re the victim of a long, calculated con game. Every aspect of this story is playing to a script written and rehearsed for decades, up to and including the part where you’re supposed to turn your backs on the people standing up for justice.

I think it's worth reading Wax's comeback, particularly if you don't agree that "bourgeois culture" has a lot going for it.

When a defense of the kind of speech that the First Amendment is intended to protect starts getting considered as a "long, calculated con game," we may be in deeper trouble than we thought.