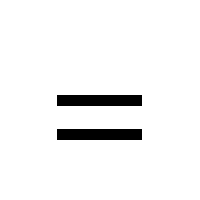 It is always problematic to use the word "is" to describe some aspect of the reality we encounter in the world that we ourselves create, the "human" or "political" world that is the product of our past and present human actions.

Using "is" to describe or characterize this human world, or any aspect of it, can be misleading, because "is" means "equals," and a sentence using the word "is" thus presents itself in the guise of a quasi-mathematical truth.

Math does state the inevitable truths that prevail in the World of Nature, which is a world that is not created by past, present, or future human activity. In the World of Nature, governed by natural laws, whatever exists is, by definition, inevitable. Our science is to "understand" that world, and literally to "stand under" and look up to contemplate a reality that preexists us, and that we may be able to utilize for our benefit, but the essential nature of which it is not ours to modify.

E=MC2, states a powerful truth. This is a truth that was discovered, not created by any human action. A statement like, "Energy is equivalent to mass times the speed of light, squared," is fundamentally different from a statement like, "America is the land of the free and the home of the brave."

All too often, as we discuss the realities of our political life, and as we utilize the word "is" in doing so, we unconsciously impart to the realities we describe a kind of "inevitability" to which they are not entitled.

We make the realities, in our world, so what "is" is only of interest as a current report. "Is" never means, in the human, political world that we most immediately inhabit, that things have to be the way they "is!"

Thank goodness for that, considering the state of the world we have created! Because we have the gift of freedom, there is nothing in the human world that we cannot transform.