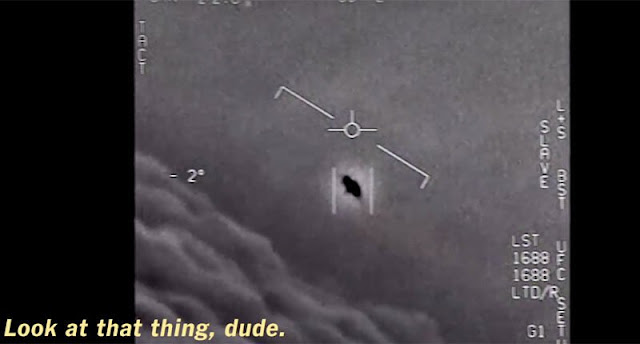 Late last year, we learned from an article in The New York Times that the United States Government funded a program to investigate the possibility that Unidentified Flying Objects (UFOs) are real, and that they represent an alien, non-human invasion of Earth's airspace. Apparently, former Senate Majority Leader Harry Reid was a major supporter of this military effort to find out more abut UFOs.

New York Times columnists Max Fisher and Amanda Taub, who write a column called "The Interpreter," had this to say about these recent revelations:

The U.F.O.s in the article have been puzzled over by a handful of top military minds for years. They have kept these investigations and their details secret, for obvious reasons.

When I read that, I thought to myself: What "obvious" reason could there possibly be to keep such a program and its discoveries secret, particularly since this program cost what would seem to be quite a lot of money to most of us.

As it turns out, Fisher and Taub were on the same frequency. All I had to do was to read further:

Trey Menefee, a political scientist at Education University of Hong Kong, told a story, on Twitter, about what happened when Chile opened its own U.F.O. investigation to the public.

The video of the U.F.O. encounter, taken by the Chilean Navy in 2014, “was the most convincing U.F.O. video I’d ever seen,” Mr. Menefee wrote. The Chilean military spent two years investigating the incident. They concluded that the footage was real, confirmed by first-person accounts, and that it showed a propelled, flying object that should not exist.

Rather than keep their information secret, as the United States does with its encounters, the Chilean government released it publicly.

And, pretty quickly, a bunch of nerds on the internet figured out that it was a commercial airliner. They even matched it up with public tracking data from the flight: Iberia Airlines 3860.

The "bottom line" conclusion of Fisher and Taub, as they have pondered what is now known about the military's U.F.O. detection efforts, is that we ought to be concerned that such "unidentified" flying objects might touch off a nuclear war:

Jeffrey Lewis, an arms control expert at the Middlebury Institute for International Studies at Monterey, Calif., made a disturbing connection.
“Your life depends on these very same people being infallible when it comes to nuclear weapons, false alarms and launch under attack,” Mr. Lewis wrote on Twitter.

In case of a major crisis with, say, North Korea, the American military will be watching for signs of a North Korean nuclear launch. The logic of these weapons means that they are on hair-trigger alert, and that North Korea might decide to use them if its leadership feels it is at mortal peril. The United States would have mere minutes to detect and respond before the missiles hit.

Those detection systems aren’t exactly the same as the ones that led American officials to (possibly wrongly) identify normal encounters as U.F.O. ones. But they’re pretty similar. So are the processes of evaluating and acting on that information.

Mistaking, say, a Spanish airliner for an extraterrestrial craft is pretty low stakes. But in a crisis with North Korea or Russia or China, similar mistakes would be riskier.

And such mistakes have happened in the past. Mikhail Gorbachev, the last Soviet premier, still keeps a statue of a goose in his home to remind himself of the time that Soviet radar mistook a flock of geese for an American missile attack, nearly prompting a rapid Soviet counterattack that would’ve killed millions.

Fortunately, the Soviets quickly realized their radars had detected mere geese. But the Americans in the U.F.O. story have spent years unable to decipher these encounters. In a crisis, they would have minutes and, unless they reached a clear and correct conclusion in that window, might feel compelled to assume the worst.

Good point, of course! My "takeaway," though, is somewhat different.

Why not stop all these efforts at "secrecy?" Those so-called "obvious reasons" for secrecy are bogus. We will all do better, as they found out in Chile, when many people are able to know about, and to think about, the facts - or apparent facts - that government leaders marshal as they take action in our names.