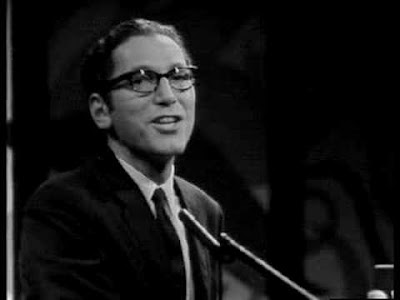 Tom Lehrer, pictured above, taught mathematics at the University of California at Santa Cruz. He also wrote and performed a series of satiric songs, many of them about nuclear war. You can indulge yourself in one of my favorites by clicking on the video link at the bottom of this blog posting. Start your day off with an upbeat song!

Tom's songs came to mind as I read The New York Times yesterday. In the hard copy edition that landed on my front lawn, a page one headline reported that a "Pentagon Plan Would Expand Nuclear Policy." Online headlines may differ.

In short, our current president and his administration, ever watching out for the interests of the American people, have decided that cyberattacks affecting Americans would be a good reason to launch a nuclear war. That's right! Those pesky cyberattacks are SO infuriating!

Gary Samore, who was a top nuclear adviser to President Barack Obama, said much of the draft strategy “repeats the essential elements of Obama declaratory policy word for word” — including its declaration that the United States would “only consider the use of nuclear weapons in extreme circumstances to defend the vital interests of the United States or its allies and partners.”

But the biggest difference lies in new wording about what constitutes “extreme circumstances.”

In the Trump administration’s draft, those “circumstances could include significant non-nuclear strategic attacks.” It said that could include “attacks on the U.S., allied, or partner civilian population or infrastructure, and attacks on U.S. or allied nuclear forces, their command and control, or warning and attack assessment capabilities.”

The draft does not explicitly say that a crippling cyberattack against the United States would be among the extreme circumstances. But experts called a cyberattack one of the most efficient ways to paralyze systems like the power grid, cellphone networks and the backbone of the internet without using nuclear weapons.

Frankly, I am not much of a fan of nuclear war no matter what the provocation, and I don't find the Obama language particularly comforting. Check out the Trump Administration proposed changes, though. If you think that "normalizing" the use of atomic weapons is the right direction for our nation, you can give a cheer for our current president.

If you don't, console yourself with the positive view advised by Tom Lehrer.

Click that video for that positive view, and particularly if you aren't familiar with this song: