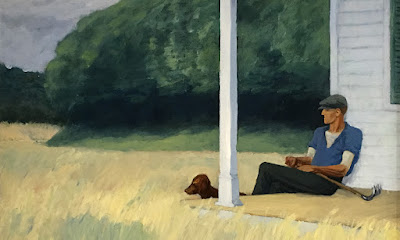 As I periodically note in this blog, there are two ways that we live in this world, and both are important. We are both "observers" and we are "actors." Here is Jennifer Stitt, a graduate student in the history of philosophy at the University of Wisconsin-Madison, writing in the journal Aeon:

Before you can be with others, first learn to be alone

In the 20th century, the idea of solitude formed the centre of Hannah Arendt's thought. A German-Jewish émigré who fled Nazism and found refuge in the United States, Arendt spent much of her life studying the relationship between the individual and the polis. For her, freedom was tethered to both the private sphere - the vita contemplativa - and the public, political sphere - the vita activa. She understood that freedom entailed more than the human capacity to act spontaneously and creatively in public. It also entailed the capacity to think and to judge in private, where solitude empowers the individual to contemplate her actions and develop her conscience, to escape the cacophony of the crowd - to finally hear herself think.

Stitt's article is worthwhile reading. Being sure that we spend some time "alone," actually thinking and contemplating both the existing realities of our world, and the possibilities we see for changing it, is absolutely critical for any effective politics. And I do think that Stitt is right. Such thoughtful contemplation is in rather scarce supply, as we search the horizon of what exists now.

In the end, however, after we contemplate, and after we think, we do need to act, and in the political world which we most immediately inhabit, we need to act together.