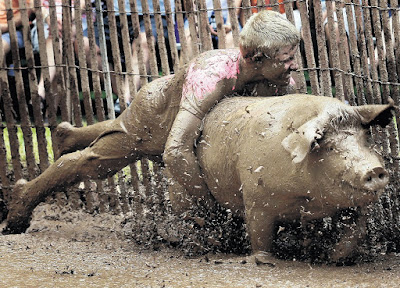 David Litt, a former speechwriter for President Obama, and the co-executive producer of The Big Bang Theory, has written an engaging column on how Doug Jones beat Roy Moore in Alabama. Click this link for his post-election analysis, which features a deconstruction of the language Jones used in commenting on one of Moore's most colorful campaign gambits.

In the column, Litt quotes a somewhat famous political expression:

You shouldn’t mud-wrestle with a pig, because you both get dirty and the pig likes it.

That makes me think about how our current president keeps inviting us all to jump into the pigpen with him - and about how most of us are willing to accept the invitation. National journalists try to match the president, Tweet for Tweet. The rest of us repair to our Facebook pages, where we can pillory our president's latest stupidity with what often amounts to a savage seriousness. Just remember that political wisdom that I have cited above: "The pig likes it!"

Litt has another idea. It's worth thinking about, too, as we get ready to put the holidays behind us, and to climb into the ring for the 2018 elections:

No, most 2018 races won’t feature an (alleged) child molester. But in the age of Trump and Bannon, plenty of them will feature ersatz tough-guys eager to turn politics into a pissing contest. By making his opponent look ridiculous, Doug Jones reminded us that Democrats don’t have to play that game to win elections. With carefully-chosen words, and a healthy appreciation for the power of mockery, they can corral the pigs without getting mud on their hands.