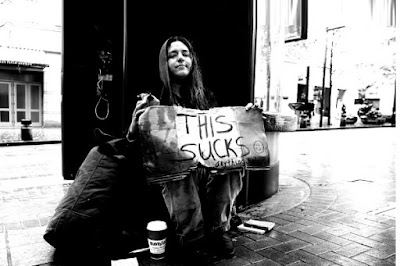 A recent edition of City Journal (a rather conservative magazine) carried an article on homelessness in Portland. According to the article, homeless persons in Portland are having an extremely negative impact on downtown businesses. The magazine called what is happening in Portland a kind of "disgraceful anarchy."


Seeing our current homeless crisis described as a "disgraceful anarchy" reminded me of the inauguration speech that President Trump gave on January 21st. As you will probably remember, President Trump painted a dark picture of an America characterized by shuttered factories, crime-infested communities, and failing infrastructure. He promised the nation:

"Carnage" is defined as "the flesh of slain animals or humans." A second definition is "great and usually bloody slaughter or injury (as in battle)." "Anarchy" means "a state of lawlessness or political disorder due to the absence of governmental authority." Given the actual meaning of these terms, it would seem fair to say that both the president, and City Journal, are way too extreme in their descriptions.

While that is undoubtedly a fair assessment, let me suggest another thought.

The extreme terms, "disgraceful anarchy," and "carnage," were used by City Journal, and by the president, to make clear that their position is that the current situation is unacceptable. Let's not quibble with the words. I, personally, might be more inclined to say that the situation "sucks," as does the woman in the picture at the top of the column, a picture pulled from the City Journal article. Whether you say it "sucks," or is nothing but a "disgraceful anarchy," or that the situation amounts to "carnage," it is absolutely true that our current economic and social situation is unacceptable and intolerable. Extreme words get this message across.

Perhaps the fact that candidate Trump called out our current American reality as unacceptable, and used extreme terms in doing so, is one of the main reasons he is president today. Those who don't like his approach to dealing with the problems (shutting down our system of environmental protection, and giving tax cuts to the rich), had better start showing some similar outrage.

And I don't mean outrage about President Trump. There are plenty of reasons to be outraged about our current president, and about what he and the Congress are doing. But what about the American carnage that has turned our cities into a kind of disgraceful anarchy?

Trump, City Journal, and the woman in the picture are right on target. Those who want a government that is more humane, and more protective of the natural environment, and that works for the benefit of ordinary men and women, people who are increasingly being driven into homelessness, will have to campaign on the outrage of the real situation that ordinary Americans face.

Being outraged about President Trump, and about what he is doing, may be well justified, but that is an outrage that is largely misdirected.

If we want to replace the politicians who are selling this nation down the river (the president is right up there at the top of the list), we'd better start getting outraged about the conditions that are impacting ordinary Americans, and ordinary American communities.

Current conditions are absolutely unacceptable, and if the president and his supporters are the only ones saying that, with the president's opponents focusing on the president's obvious and enormous personal failings, the voters are likely to go with the guy they think understands just how outrageous conditions have become.